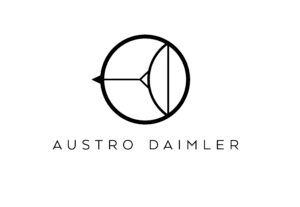 For the 120th anniversary of the traditional Austrian car brand “Austro Daimler”, they present the spiritual heir of the legendary ADR, that became renowned as “Bergmeister” (mountain master) because of its numerous successes in mountain races and was later also marketed under this name.

The new Bergmeister builds on a long tradition of innovative vehicle construction. A sporty touring car designed as a classic Gran Turismo, with a new line as a combination of GT and Shooting Brake – they call this creation “Shooting Grand”.

With intelligent lightweight design and sophisticated, ground-breaking technologies, it was possible for Austro Daimler to achieve a curb weight of 1650kg and stunning performance with unprecedented efficiency, combined with balanced axle load distribution. To ensure sportiness and refinement, a heart of six cylinders beats under the aluminium space frame. The brain of the drive is the SERIPA hybrid powertrain, which was specially developed for the new Bergmeister.

This novel configuration of an internal combustion engine in combination with three high-performance electric motors accelerates the pulse – and from 0 to 100 km/h in 2.5 seconds. It does not, however, burden the conscience, with a purely electrical range of up to 250km and a total range (according to WLTP cycle) of up to 1,000km.

The design of SERIPA, in the new Bergmeister, demonstrates the performance of the system in the interaction of extremely powerful engines. Even the performance data of the SERIPA Performance Hybrid reflect the connection to the tradition of Austro Daimler and Austria itself. The sum of system power (1,198bhp), torque (maximum 1,600Nm) and range (1,000km) yields the height of the Grossglockner (3,798m).

Based on the principle of a plug-in hybrid, the battery for the 600 kW electric drive of the new

Bergmeister can be loaded with up to 150 KW charging power. At a length of 4,544mm, a width of 2,087mm and a wheelbase of 2,636.95mm, the new Bergmeister not only has an impressive appearance, but also outstanding road holding and driving characteristics.