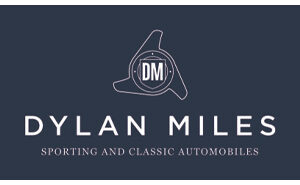 For over a decade, Dylan has worked for some of the most prolific international organisations in the classic car world including RM Sotheby’s, Fiskens and New York-based Aston Martin specialist Autosport Designs. During this time, he gained invaluable experience and built relationships with some of the industry’s most influential figures. In 2017 he founded his own company, Dylan Miles Ltd, launching it here at the Salon Privé Concours d’Elégance.

For Dylan a lifelong fascination of old cars and bikes was inevitable. His father has dedicated his life to restoring rare Brough Superior motorcycles and Dylan grew up surrounded by the ‘Rolls-Royce’s of motorcycles’. But whilst he loved those exotic two-wheeled machines, it was cars that really piqued his interest and led him to focus on a career in the motor trade dealing with some of the finest two and four wheeled machines on the planet.

Dylan Miles Ltd. specialises in the sale and acquisition of classic cars, modern sports cars, sports racing cars and vintage motorcycles. The company prides itself on providing an enthusiastic, professional, insightful and international service to all of its clients. Whilst we do not focus on one particular marque, Aston Martin remains an integral part of the business but we have extensive knowledge and interest in other sporting marques which will be evident by the varied and exciting array of cars to be shown at this year’s event.

They look forward to welcoming you on their stand at this year’s Salon Privé.