This impressive motorcycle will be joining us in the ‘Exceptional Competition Motorbikes’ Class for the Chubb Insurance Concours d’Elégance. Taking a quick leaf from Formula One’s impressively thick book there have been periods when it was Ferrari, Mercedes, or McLaren who ruled supreme. So, it was with Norton, for between 1930 and 1937 they won 78 of a possible 92 Grand Prix; to cap that, they scooped no less than seven Senior Isle of Man TTs, dating 1931 thru 1939! 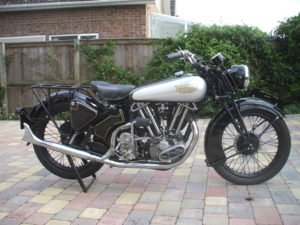 Capitalising on this success the relatively tiny Birmingham firm produced a series of 350 & 500cc International models that were fully highway-legal but whose engine and rolling chassis replicated that of the factory racers.  It is a matter of universal regret that the production rate of this Bees Knees bike rarely exceeded more than fifty per annum.

This has been a Motorcycle Monday, stay tuned for our weekly Car of the Week Friday – Discover the full list of classes for the Chubb Insurance Concours d’Elégance here.