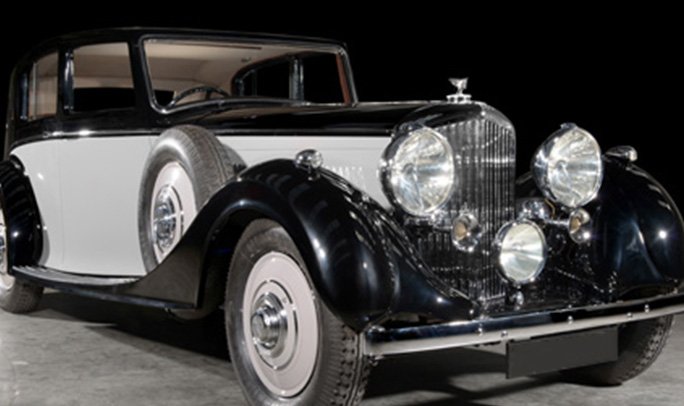 An exceptionally rare all-aluminium example, this 1938 Bentley 4.25 Litre underwent a thorough restoration in 2013/14. The restoration was carried out under the highest, most exacting standards. Upon completion, this Bentley made its first public appearance in June 2014, where the car was awarded ‘First in Class’ at the prestigious Rockingham Castle Concours, a marquee event organised by the Rolls-Royce Enthusiasts’ Club.

Shortly after the passing of Henry Royce in September 1933, the Bentley 3.5 Litre (later enlarged to 4.25 Litre) was presented to its adoring public. This was the first new Bentley model following the acquisition of the Bentley brand by Rolls-Royce in 1931.

Bentley themselves sold only the bare rolling chassis with the following completed components; the engine, gearbox, scuttle and radiator. This allowed coachbuilders to construct bodywork to their buyer’s exacting requirements.

Bentleys belonging to this era were known as Derby Bentleys. Rolls-Royce constructed their legendary vehicles in Derby, East Midlands and this is where the colloquialism originates from. Bentleys produced prior to the Rolls-Royce takeover were affectionately known as Cricklewood Bentleys.

Chassis series A to F were 3.25 Litre cars; G to L (excluding I) were 4.25 Litre vehicles and finally the M series marked the 4.25 Litre Overdrive chassis. Each series consisted of 100 chassis numbers in total, including odd and even numbers. Interestingly chassis numbers 13 and 113 were not used under any circumstances. These measures were put in place to avoid upsetting superstitious customers!

Records indicate a Mr Jack Barclay ordered a small run of ‘Pillarless’ saloons which were to be bodied by Park Ward. Some of these examples were steel-bodied, this particular example is all-aluminium.

Unfortunately time is a cruel, unforgiving mistress and this 1938 Bentley 4.25 Litre Pillarless Saloon suffered at her hands – its aluminium body and solid ash frame corroded, its owner bravely agreed to the construction of an entirely new frame made to the most precise of standards. The majority of the body panels were also re-fabricated by hand.

Thornley Kelham restorations rebuilt the engine, gearbox, sub-assemblies and repainted the car in two-tone black and grey, which might we add, looks absolutely spectacular. Thornley Kelham also re-produced the original 18″ wheels and adorned the car’s interior with luxurious, opulent leather which would have been used in period.