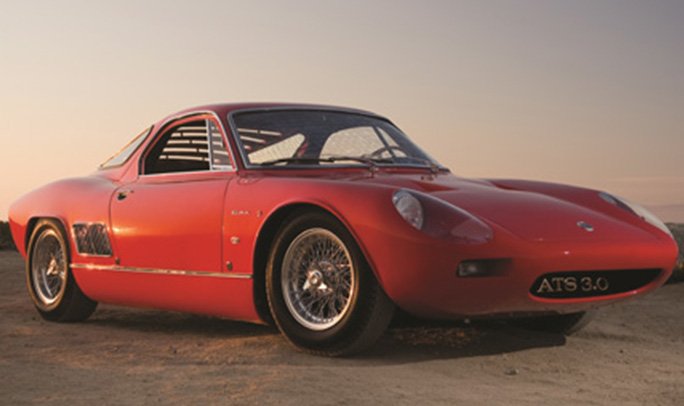 ATS or Automobili Turismo e Sport S.p.A, was an Italian manufacturer of automobiles and a professional racing team.

ATS was set up by Carlo Chiti and Giotto Bizzarrini, both men were heavily involved in the development of the astonishing Ferrari GTO. As refugees of the infamous Ferrari ‘Palace Revolt’ of 1961, Chiti and Bizzarrini intended to launch a direct competitor to Ferrari, their former employer. Development of the concept car, which would later become the incredible 2500 GT, started whilst Chiti was still at Ferrari – the project he was working on aimed to produce the first mid-engine Ferrari. However, after their departure the concept was further developed under the auspices of ATS. Ferrari continued to develop a mid-engine competitor, the 250LM concurrently, but under Enzo Ferrari’s direction the 250LM would be fitted with a V12 rather than the V8 used in the 2500 GT.

With sponsorship secured from a trio of wealthy industrialists, including Count Giovanni Volpi, founder of Scuderia Serenissima, ATS decided to develop a road car and a Grand Prix racer.

Phil Hill, the 1962 World Driving Champion was picked to drive for the racing team whilst a number of other, well-known race drivers engaged in the development of the road car. Sefarino Allemano, the famed Turin-based coachbuilder was in charge of construction, whilst the sleek, flowing bodywork was designed by none-other than former Bertone stylist, Franco Scaglione.

The ATS 2500 made its debut at the Geneva Motorshow in 1963. The car caused a sensation, its advanced mid-engine layout, bold , shark -like bodywork and race-inspired technical specifications bore all the hallmarks of a cutting-edge, automotive masterpiece.

In many respects the ATS 2500 GT Coupé was a thinly veiled racing car, capable of exceeding 160 mph. Powered by a mid-mounted V8 engine designed by Chiti with a light-alloy block and cylinder heads, a single overhead camshaft per cylinder bank and a quartet of Weber twin-choke carburettors, it produced between 220 to 250bhp. The car was based on a competition-specification braced chrome-molybdenum tubular chassis, with fully independent suspension and four-wheel disc brakes. This was, for all intents and purposes, a seriously fast car.

ATS consistently struggled with inadequate working capital, resulting in just 12 chassis being built, 8 of which were complete cars.

A complete restoration of the ATS 2500 GT was completed in July 2009. Appearing at Pebble Beach Concours d’Elegance, the ATS placed 3rd in the ‘Post War Sports Car’ class – a very competitive class indeed. The previous day the vehicle performed flawlessly throughout the Pebble Beach Rally Tour. A popular and rare motor car, the ATS 2500 GT has been invited to attend next year’s Concorso d’Eleganza Villa d’Este at Lake Como, Italy.

The vehicle’s interior retains its original appointments, namely the black Connolly leather upholstery and Wilton wool carpeting. Due to a short development and production cycle the ATS 2500 GT did not have an owner’s manual.

The original, vintage Heuer Speed Pilot and rally chronometer are present and rally-style lap belts are included with four-point shoulder harness mounts in place. The original transmission gears are preserved in addition to copies of the original blueprints for both the 2.5-litre and 3.0 litre V8 ATS engines.

This ATS, chassis 2004, is an incredibly important motor car. It is the last example built and 1 of only 2 examples with the 300-horsepower ATS 3.0-litre V8 engine. A stunningly rare, yet beautiful example.