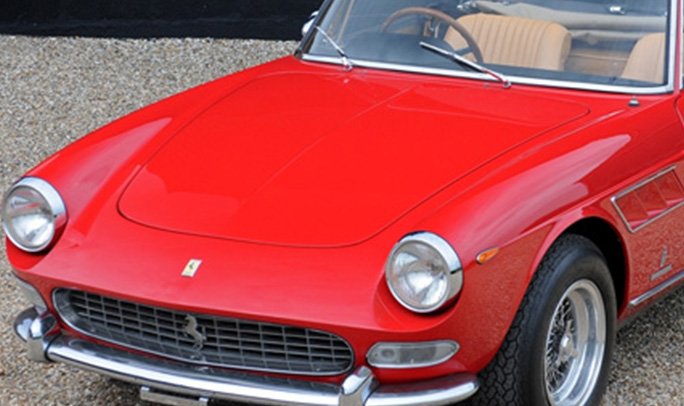 Originally ordered by Maranello Concessionaires Ltd for the UK market, this 275 was the 1st of 5 RHD 275 GTS models released to the U.S. It is reported as having been modified with 6 carburettors for a better ‘market fit’ – a configuration it still wears today.

Launched alongside the 275 GTB at October 1964’s Paris Auto Salon and replacing the Ferrari Series II 250 GT PF Cabriolet, the GTS produced an ample 260bhp. A formidable performer, with a top speed approaching 150mph and a 0-60 time of just 6.6 seconds, little else could match the GTS as great all-rounder. Style, luxury and poise – the 275 was and still is, a sensational high speed open-top touring car.

This model is 1 of 19 RHD cars. Produced from a total run of 200, the car features 6 carburettors. Factory records indicate no change in specification, so in order for this 275 to obtain the world-renowned Ferrari Classiche certification, it was returned to its original 3 carburettor layout.

However, the car’s owner much preferred the extra power offered by the 6 carburettor arrangement and subsequently had it refitted. He also retained the triple assembly to allow the car to be returned to ‘factory’ specification at any time.

Subjected to a thorough, full restoration, this 275 is presented in classic Ferrari red with a luxurious tan leather interior. The car has spent most of its life in major collections in the U.S, before relocation to Australia in 1999. Restored to Concours condition, this elegant 275 has graced just one Concours showfield in its lifetime, where it won first place in its class at the Auto Italia show in Canberra 2003.