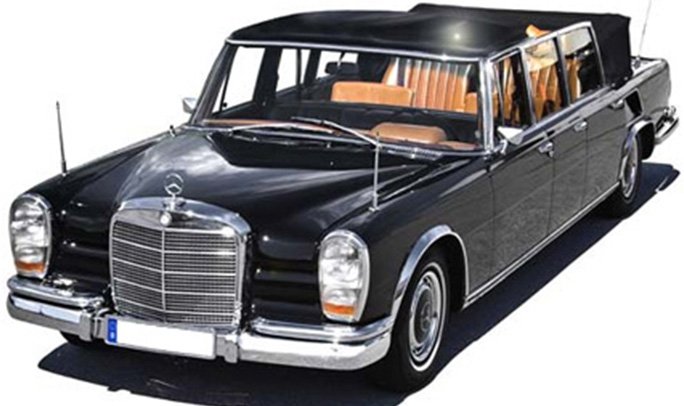 The Mercedes-Benz 600 was first revealed at the 1963 Frankfurt International Motorshow as the long awaited successor to the incredible 540K. The production team were given one goal, and one alone, to create the finest car the world had ever seen.

Work began on the Mercedes-Benz 600 8 years before its launch. Quite impressively, the design team were not burdened with any budgetary limitations or restrictions. With this blank canvas, Mercedes soon installed their first ever V8 which developed 250bhp and enough torque to allow the 2640kg limousine to reach speeds well in excess of 125mph. At the time these figures proved astounding.

Each car offered an extraordinary specification list, with an advanced hydraulics system implemented across the vehicle to control doors, brakes, the sunroof, the boot, central locking, the glass partition, all seats, windows and the suspension system.

Only 2677 were built in total and due to cost of purchase and the remarkable level of luxury each car provided, the Mercedes-Benz 600 was the staple choice of many a high powered royal, politician, celebrity or plutocrat between 1963 and 1981. The most special variant of all was the Pullman Presidential ‘Long-Top’ Landaulet. With just 10 built, this particular model was reserved only for royalty or heads of state. Owners included HRH Queen Elizabeth II, Pope Paul VI, Chairman Mao, President Ceausescu and Prince Rainier of Monaco.

The Mercedes-Benz 600 Pullman Presidential ‘Long-Top’ Landaulet on show at Salon Privé 2014 is taking part in our ‘Fit for a King’ class. This car too, had an infamous owner, none other than Josip Broz Tito, the ‘benevolent dictator’. Tito was a Yugoslav revolutionary and statesman, serving as the President of Yugoslavia between 1953 and 1980.

Always sharply dressed with an accompanying Cohiba between his fingers, Tito loved to make a statement, and many experts believe this is why he chose the six door Landaulet as his car of choice. As the nation’s figurehead Tito was required to look his best at all times, thus he had a bespoke vanity station installed which included an electric razor, comb and a selection of after-shaves.

Tito kept the car until his death in 1981. It has been used to welcome some of the world’s most important royals, politicians and dignitaries, including Her Majesty Queen Elizabeth II in 1972 and the President of the United States, Richard Nixon, in 1970.