A Stunning Car with a Decorated History 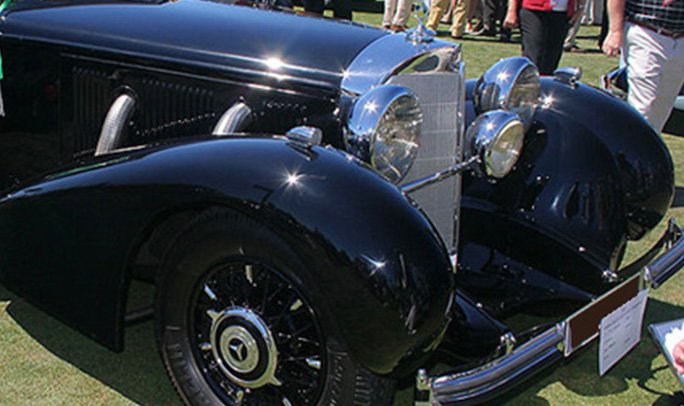 The 1935 Mercedez-Benz 500K Kombo Roadster by Windover, presented in our exclusive class: ‘Grace and Pace: Pre-War Sports Cars’ is one of approximately 20 500K’s completed with British coachwork. Registered in Dec 1935 in London as ‘CLB 858’ this one-off was delivered to none other than William Henry Rhodes-Moorhouse, the son of the first man ever to be awarded a Victoria Cross for aerial combat.

‘Willy’ as he preferred to be known was the son of the first man ever to be awarded a Victoria Cross for aerial combat and he followed in his father’s footsteps, joining the prestigious RAF 601 ‘Millionaires’ Squadron. Willy played a valuable role in aerial battles such as the Borkham Raid and the Battle of Britain and was soon recognised as a Hurricane ‘Ace’.

The above story only adds to the provenance of our particular car. Introduced in 1934 at the Berlin Motor Show the Mercedes-Benz 500K was the brainchild of Mercedes’s technical director Dr Hans Nibel, a former racing driver turned master engineer. His past credits included the mighty 200HP Blitzen Benz and the impressive Mercedes-Benz S , SS, SSK and SSKL series, which classic car aficionados will note was the result of a successful collaboration with Ferdinand Porsche himself.

Dr Nibel’s commitment to a unified design philosophy meant that the marque’s fastest road car – the 500K / W29 had a surprising amount in common with its epoch-making ‘Silver Arrow’ Grand Prix Racer sibling, the W25.

The 500K was powered by a 5 litre OHV engine which was tuned for torque rather than horsepower. It was quoted to generate a lazy 100bhp at 3,200rpm in normally aspirated form but an altogether more spirited 160bhp with its double-vane Roots type blower engaged, (a process which involved the driver depressing the accelerator pedal beyond a set pressure point).

Given that the later 540K was widely credited with a force-fed 180bhp and 318lb ft of torque, it seems likely that peak torque was approximately 300lb ft – though official figures remain frustratingly elusive!

Autocar magazine summed-up the 500K as “a master car for the very few” praising its refinement, the publication also commented that “without the supercharger the 500K is a quiet, docile carriage, the acceleration from low speeds being rather mild. It ambles around town and along by-ways with scarcely a hint of its latent performance. Bring in the supercharger and it becomes another machine, with fierce acceleration”.

The Windover Kombination Roadster is awash with bespoke detail. Redolent of the floats worn by the Schneider Trophy winning Supermarine S6B seaplane, its fabulous pontoon wings carry elegant spats to the rear, complete with raised ‘speeding teardrop’ blisters and iconic-three pointed star badging. The focus of the well-appointed 2+2 interior, trimmed in elegant tan leather, is the trademark mother of pearl dashboard which houses a cream-faced speedometer calibrated to 140mph.