The UK public debut of the new Ghost will headline the Rolls-Royce presence at this year’s Salon Privé. The most technologically advanced model ever designed by the iconic marque is set to be unveiled in the suitably luxurious surroundings of Blenheim Palace, while two of the most coveted cars from its long and illustrious history will star in the Salon Privé Concours d’Elégance presented by AXA. 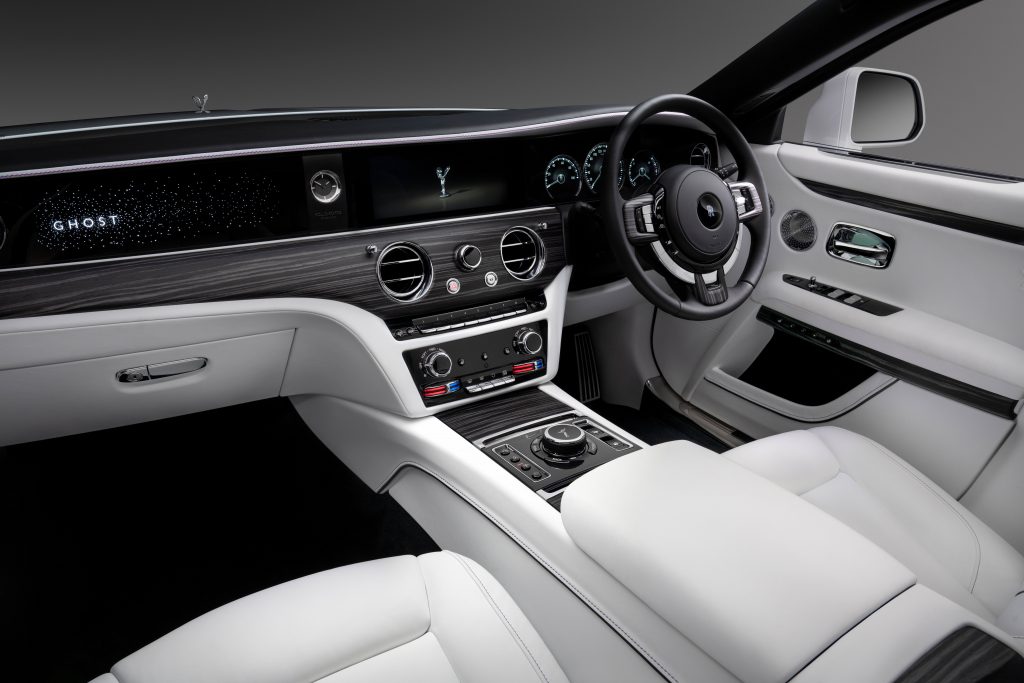 The latest Ghost replaces the most successful product in the 116-year history of Rolls-Royce and reflects the company’s ‘Post Opulent’ design philosophy – as well as Sir Henry Royce’s timeless edict to ‘Take the best that exists and make it better’. Only the famous Spirit of Ecstacy and the umbrellas were carried over from the previous Ghost. Everything else has been crafted and engineered from the ground up.

Based around a rigid aluminium spaceframe, the luxurious saloon features an effortlessly powerful 6.75-litre twin-turbo V12 engine and incorporates all-wheel drive and all-wheel steering. The redesigned Planar suspension system provides the marque’s fabled ‘magic carpet’ ride and works in tandem with the Flagbearer system, which uses cameras to read the surface ahead so that the Ghost can anticipate and react to even the most demanding roads. The driving experience is further enhanced by the Satellite Aided Transmission, which uses GPS data to pre-select the optimum gear for the corner ahead.

Inside, the aim was to create a serene driving experience, and the sumptuous cabin features a world first in the shape of its Illuminated Fascia. Developed over the course of two years, it produces a glowing ‘Ghost’ nameplate surrounded by 850 stars on the passenger’s side of the dashboard, and is typical of the painstaking attention to detail that has gone into every aspect of the car.

Such engineering excellence has always been a Rolls-Royce hallmark, as proven by two more cars that will grace the lawns of Blenheim Palace. The Salon Privé Concours d’Elégance presented by AXA will include a 1911 Silver Ghost with two-seat open tourer coachwork by Rippon. It was the legendary 40/50hp that first earned the famous label of ‘the best car in the world’, and this exquisite example – one of a number of cars owned by The Daniel Ghose and Ana Polo Collection – was first delivered to London-based Sir Adolph Tuck.

It originally wore Mulliner Landaulet bodywork but, as with so many Edwardian and Vintage cars, it was rebodied following World War Two, and in 1977 formed part of the Queen’s Jubilee Parade from Windsor Castle to Ascot. More recently, it has been restored to its present concours-winning condition and will be a magnificent sight on the show lawns.

It will be joined there by an ex-Sir Malcolm Campbell Phantom II Continental Touring Saloon. Chassis number 140MY was delivered to the Land Speed Record hero on 28 March 1933 – Campbell was such a fan of the marque that he wrote the official brochure for the Phantom II, entitled ‘The best Rolls-Royce yet produced’.

The last of Campbell’s three Phantoms, it wears handsome Barker & Co coachwork, and Salon Privé will offer British enthusiasts a final chance to appreciate its beauty before it travels to India, where it will be housed in the prestigious YZP Collection & Museum.

Salon Privé Director David Bagley said: “With more than 20 new models set to be unveiled by some of the world’s greatest automotive brands, this year’s event is already set to be a landmark week. The announcement that Rolls-Royce has chosen Salon Privé to give the new Ghost its UK public launch is particularly exciting. We can’t wait to get a glimpse of the marque’s future, alongside the great models from its past that will be centre-stage in the Salon Privé Concours d’Elégance presented by AXA.”