This phenomenal Bentley 4¼ Litre will be joining us in the Graceful Pre-war Motoring Class, it is one of only four cars fitted with open tourer style coachwork by Vanden Plas. Chassis #B154MR is arguably one of the most famous Derby Bentleys left in existence and is commonly known as ‘Honeysuckle’, due to the colour of its coachwork. 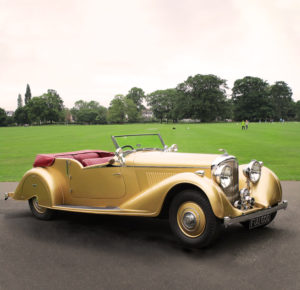 Formerly owned by The Hon William Douglas-Home, playwright and brother of former Prime Minister Sir Alex Douglas-Home. Its current owner has restored the car to bring it back to showroom condition, including a full coachwork restoration, chrome re-plating, new carpets, a new hood cover to match the interior leather, a re-wire and full mechanical preparationThe car was originally ordered by Captain E. Molyneaux, with its original coachwork, carried out by Thrupp & Maberley, removed and placed on Chassis #B35MX, which was also owned by Captain E. Molyneaux. Vanden Plas made a new body for Chassis #B154MR and delivered the car in June of 1939 to Mrs Smith-Bingham.

In 1951, following the cessation of hostilities, the car was acquired by Johnnie Green, who owned the car for over thirty years and it subsequently appeared in numerous books due to its fame, unusual colour and its beauty.

In 1986, it was sold on to another owner who kept it until 1993 before selling to the Blackhawk Collection in California.  The car has been with its current owner since 2013.

It is truly a magnificent motor car in every respect and we are looking forward to welcoming it to the Chubb Insurance Concours d’Elégance on August 31st. 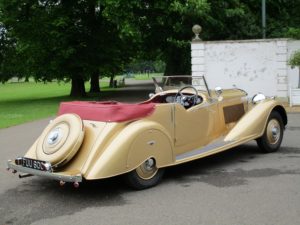 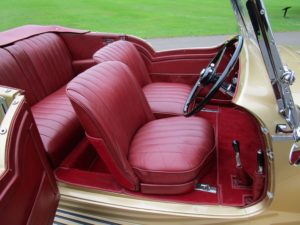