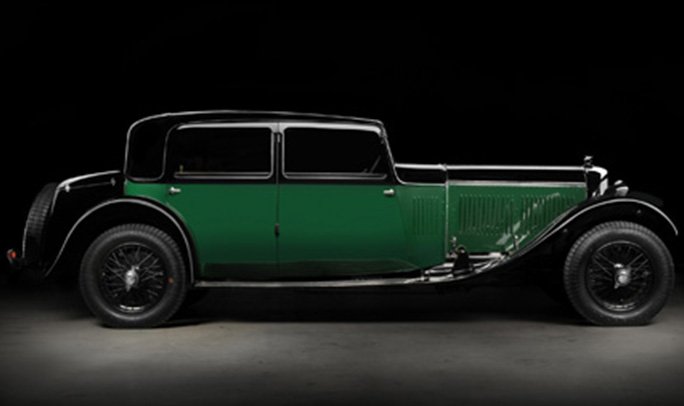 100 examples of the stunning Bentley 8-Litre Sports Saloon were produced before the original Bentley Company entered into insolvency. Had Bentley been in a stronger position commercially, the above numbers would likely be significantly higher. It is said that 78 Bentley 8-Litres survive today.

A majestic vehicle, the 8-Litre represented the pinnacle of luxury travel. Bentley’s answer to the formidable Rolls-Royce Phantom II, the 8-Litre offered better performance at a similar price point. That said, the 8-Litre was unable to alter Bentley’s fortunes, regardless of praise lavished on the car by the motoring press.

The 8-Litre was revealed at the 1930 London Motorshow and at the time, had the largest engine of any car manufactured in the UK.

It is said that the Bentley’s quality of ride was unequalled. The car’s raison d’être was to be the first luxury vehicle to achieve speeds of 100mph whilst remaining practically silent. Tests indicated that the 8-Litre could achieve this impressive feat, even with substantial coachwork.

“I have wanted to produce a dead silent 100mph car and now I think we have done it”. – W.O. Bentley

Mr Jack Charters purchased the car in 1948, he promptly took the 8-Litre to Canada where he and his then wife used it to travel cross country in style. In 1949 ownership changed hands again and Capt. L. Goudy kept the car until 1971.

Goudy recalls a time when he was stopped by the Vancouver police. Initially, Goudy was worried that he was being charged for a motoring offence, but the officers merely wanted to look at the 8-Litre’s imposing engine!

Surprisingly, one of the officers mentioned in passing that his uncle Lycett used to race Bentleys, this was none-other than Forrest Lycett himself, the famed racing driver.

By the early 2000s, the 8-Litre required minor engine adjustments. R.C. Moss carried out the work and it was here that they found the original gaskets in the engine block – a fitting illustration of just how original this sensational 8-Litre is.