The event, held from 23rd-26th September at Blenheim Palace, will be the first time the ground-breaking, two-stroke, road legal motorcycle has been seen in public and it is great to see the Two Stroke launched at the same event as other beautiful new cars and bikes this year.

The Langen Two Stroke stands out from the crowd. It defies convention by using the latest two-stroke, 250cc, V-twin engine and will attack your senses through the sound, smell and sheer thrill that only a lightweight, two-stroke can deliver. And its redline? How does 14,500rpm sound! 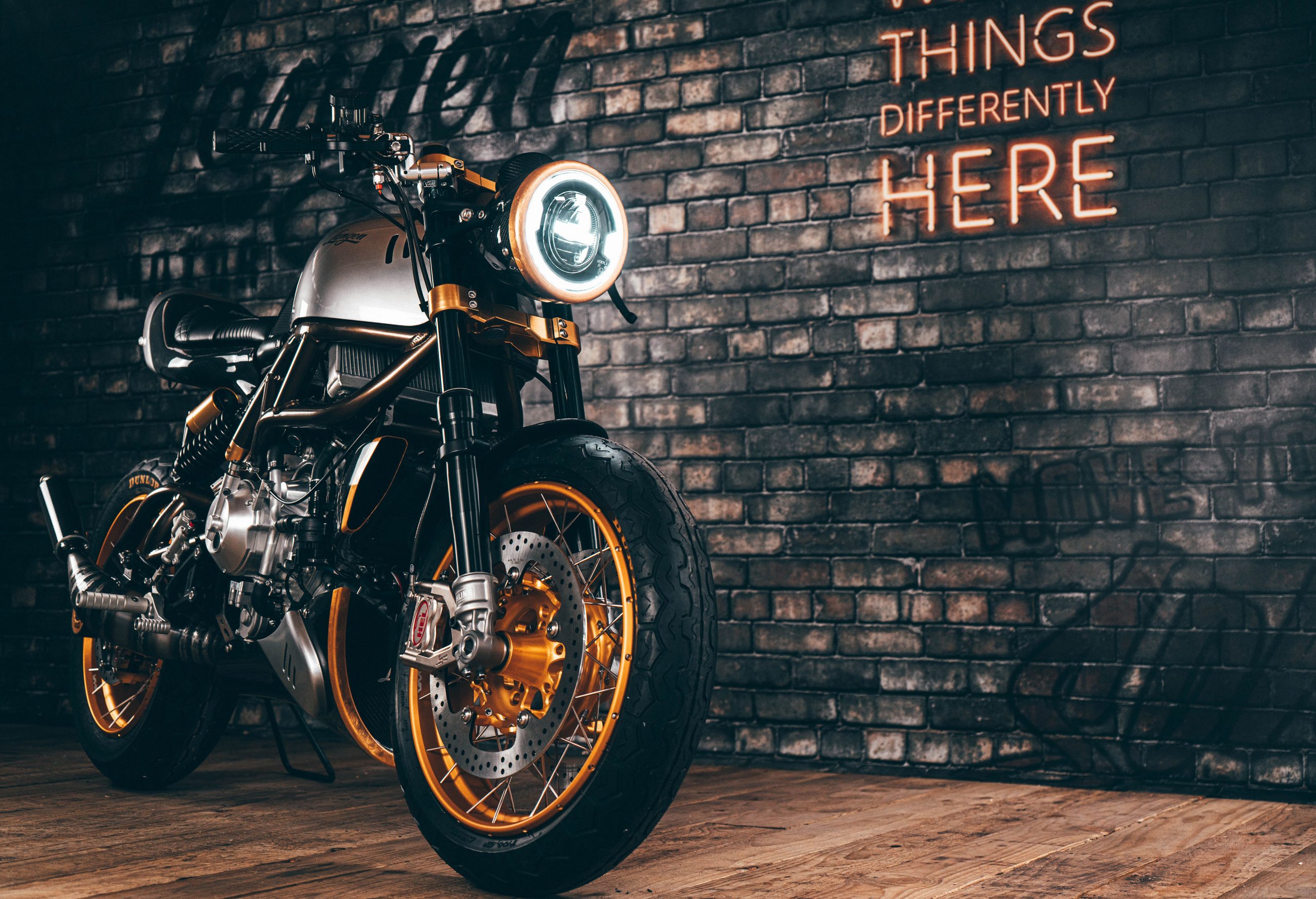 The Two Stroke’s heart is produced for Langen by Vins, who are based in Maranello, Italy. The engine produces more than 75bhp (56kW) and 45Nm (33lb.ft). Born from an ‘extra-curricular’ passion project from members of the Ferrari research and development department, the CNC-machined engine has been developed over the last five years and suits the Langen Two Stroke perfectly. A combination of fuel injection, ECU-controlled oil injection, carbon fibre reed valves and electronic exhaust valves enable the engine to produce eye-watering performance figures, yet within an environmentally-friendly set up as a highly tractable, road legal motorcycle.

The Langen Two Stroke is a handmade, bespoke creation. The chassis is made by hand from large-diameter, laser cut aluminium tubing, with bonded and machined connection points. Light, Ohlins front forks and British K-Tech rear shocks control the nimble machine. The bodywork, including the fuel tank is made from hand-laid carbon fibre, as is the gold leaf detailing.

Langen is really proud of its roots and the Two Stroke has been designed, engineered and built in Wigan, Greater Manchester. Partnerships have been made with the best British manufacturing companies to produce components of the bike which require specific expertise and experience such as such as Hel Performance brakes, Dunlop tyres and K-tech suspension. Every detail of the Two Stroke has been carefully considered, crafted and specified to uphold Langen’s values of quality, innovation and tradition. 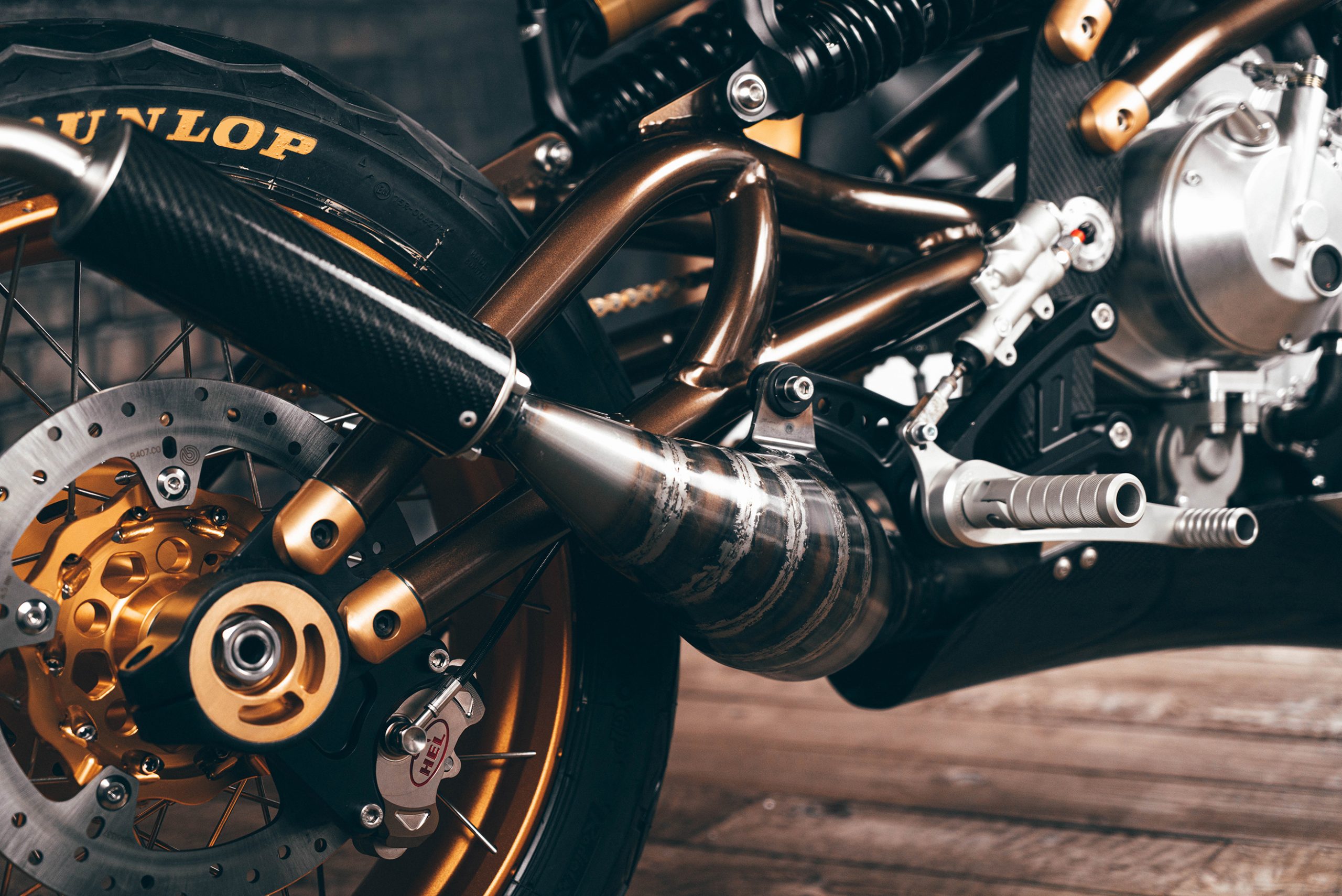 Each engine will be built to order and individually numbered to match the customers motorcycle, with fully CNC machined casings and custom interchangeable gearbox. Customisation can range from paint colours, chassis finish and suspension type to wheels, along with tailored ergonomics for each individual rider.

Chris Ratcliffe, creator of Langen and designer of the Two Stroke, has more than 10 years’ experience designing successful motorcycles. He says:

‘The company has been founded with the aim of producing motorcycles with a simplicity and purity of days gone by, like the ‘Ton-up boys’ and their Caf racers – yet pushing the limits of modern technology.

My dream has always been to create a small piece of British motorcycling history. To be able to launch this special motorcycle under a completely new brand really is a dream come true.

The aim is to continue to push boundaries and create more interesting bikes, which we hope will really please people.’

The initial build will be limited to 100 individually numbered Two Strokes, which will be road legal in the UK. Production is targeted to begin in summer 2021. A further 150 motorcycles will be produced starting 2022, which will be available in homologated form for road use in other countries around the world. The total number of builds will be strictly limited to 250 bikes, each of them built to order.

The Two Stroke is priced from £28,000 plus VAT where applicable. Due to the overwhelming response so far, pre-orders are now being taken with a £1000 refundable deposit to secure one of the 100 initial bikes.