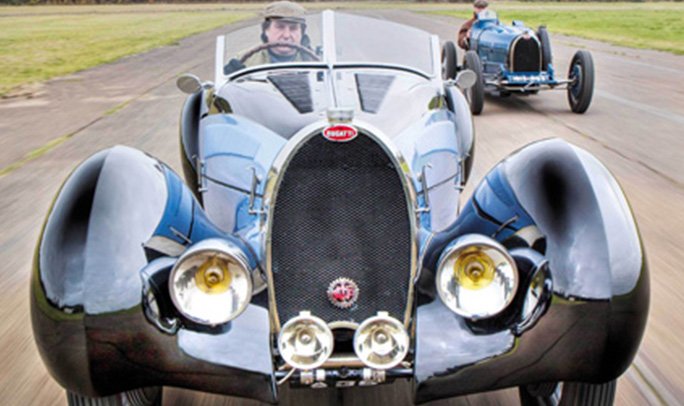 A striking roadster – and a mysterious one at that! Previously owned by Madame Itier and sold in 1938, no one knows who designed the coachwork and indeed, who it was intended for!

Serious, determined and rarely photographed smiling, Madame Anne-Cecilé Itier started racing in 1926. She was best known for driving an impressive 4-cylinder Bugatti Type 37. However, upon achieving financial independence (after divorcing her husband) in 1930, she ordered a straight-8 Type 51A Grand Prix car directly from the Bugatti factory in 1933.

Itier had a successful first season in her Bugatti T51A, taking part in 12 events ranging from hillclimbs to voiturette races. Well -travelled she raced in France, Germany and Poland.

For the next 5 seasons Madame Itier raced actively. A fierce competitor, she was more than happy test herself in any race. A point illustrated perfectly by her decision to race a plane in 1936, Montlhéry, France – a remarkable feat.

Her car was famed for its reliability and retirements were few and far between, she only suffered one major accident, when she ran into a ditch at the Eymoutier hillclimb in August 1935. After more than 30 events, Itier’s final Grand Prix took place in Berne, 1937. After a storied and eccentric racing career, Madame Itier then decided to retire from front-line racing and then sold her beloved car.

The car’s new owner afforded the Bugatti a new lease of life as a road car. The racing engine was replaced by a less potent Type 38A engine and the Bugatti was re-bodied with a stunning, art-deco roadster body. The resplendent coachwork was most likely crafted in Paris, 1938, but as mentioned previously no one knows who this particular coachbuilder is. A curious mystery which only adds to the car’s allure.

In 1956 the car was sold on commission by a small Parisian dealer to Erik Nielsen, a Dane living in Paris. The mystery roadster was then sold in 1964 to Swedish enthusiast Allan Soderstrom, the car took pride of place in his private collection and remained virtually unseen for 30 years, before being purchased by its current owner.

In 2010, Bugatti historian Pierre-Yves Laugier delved into the car’s history. On discovering the roadster was born as a Grand Prix racer, the current owner restored the car back to its Type 51A, Grand Prix form, using an original Grand Prix body and engine. Subsequently the roadster body and T38 engine were re-built on a different chassis, forming the car you see before you today.