Furlonger Specialist Cars has announced a stunning line-up of ground-breaking vehicles that it will display at this year’s Salon Privé show.

Furlonger stars to include a UK first

The Furlonger stand will play host to one of the most iconic cars to roll out of the gates at Sant’Agata; the Lamborghini Miura. The 1967 Lamborghini Miura P400 on display at Salon Privé is the original London Motor Show car and the first right-hand drive Miura delivered to the UK. Finished in Rosso Miura with Nero trim, this magnificent car has been fully restored to concours condition. Featuring matching numbers, this example was first owned by a member of the Thomas Cook family.

Three stunning Colombo V12-engined Ferraris will also take pride of place on the display in the grounds of Blenheim Palace, all featuring the brand’s iconic V12 engine. A fully restored 1963 Ferrari 250 Lusso, one of only 350 examples built by Ferrari, has been selected to appear. Priced at £1.5million and finished in Grigio Argento with a Nero Pella hide interior, this 250 Lusso spent over 40 years in America before arriving in the UK in 2017. Along with matching numbers and exceptional provenance, Furlonger recently completed an extensive engine-out service to ensure its unquestionable condition.

Furlonger will also show two other highly significant V12 Ferraris, a 1967 Ferrari 275 GTB/4 and a 1971 Ferrari 365 GTB/4. The Ferrari Classiche certified 275 GTB/4 is a highly original example having spent 30 years in the same family, and is priced at £2.5million. The 365 GTB/4 is one of only 158 right-hand drive Daytonas sold in the UK. Finished in Rosso Chiaro with a Nero interior, this matching number fully restored 365 GTB/4 includes a factory air conditioning system and wide rear Cromodora wheels. A wealth of service history including the original leather wallet enclosed handbook, parts book and original Shell duster are befitting of its historic status, with this example priced at £500k.

Furlonger will also display a 2007 Bugatti Veyron featuring the highly collectable colour combination of Blue Black Metallic with an interior trimmed in Blue Leather and Alcantara. Originally destined for Belgium, this 1,478-mile example has been meticulously maintained by Bugatti and is a prime example of the Molsheim-built W16-engined hypercar. Recently serviced, the £1.175million asking price includes a Bugatti three-year servicing package.

Furlonger is entering an ex-factory owned pre-production 2015 Ferrari F12 TDF into the ‘Classics of the Future’ class of the Concours d’Elégance. Considered by many to be the most significant F12 TDF to leave the Maranello factory, this example was used to launch the car at the Finali Mondiali in Mugello, Tuscany. The launch was hosted by ex-World Champions and Team Ferrari drivers Sebastian Vettel and Kimi Raikkonen, together with Ferrari Chairman Sergio Marchionne. Vettel later carried out a demonstration drive around the circuit, and the car soon became widely recognised in the UK when it twice featured on BBC’s Top Gear. 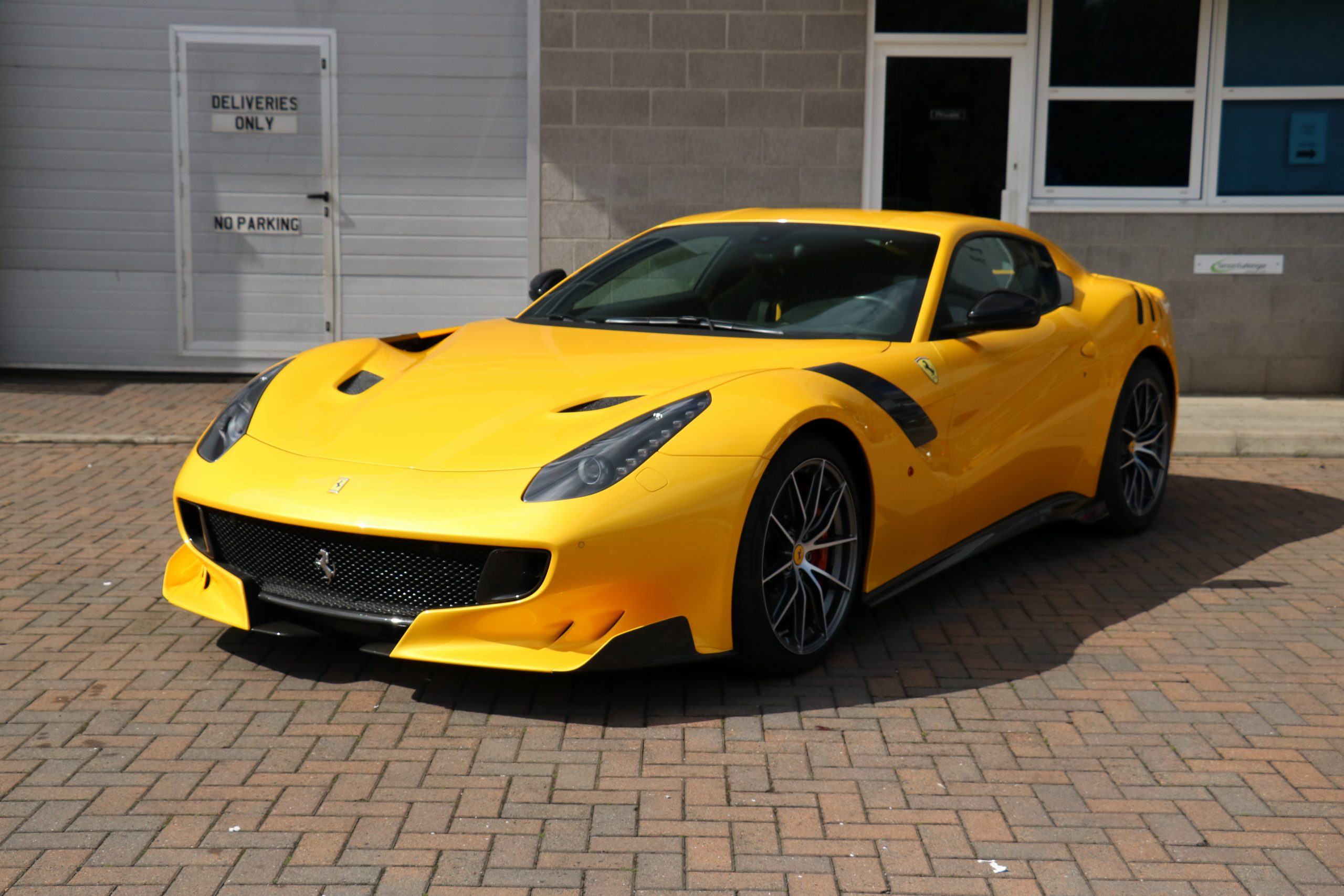 Ferrari later turned this example of the TDF into a one-off 120th Anniversary Special Edition, designed to celebrate the 120th anniversary of the birth of Enzo Ferrari. The car was sold at the Centro Dino Ferrari charity auction, an organisation set up by Enzo Ferrari in the name of his first son Dino. The decision by Sergio Marchionne to gift the car to the charity was said to be one of the last decisions he made at Ferrari before his death.

Furlonger is also entering a 1973 Dino 246 GT into the ‘Post-war Touring (Closed)’ class. This right-hand drive UK example has been painstakingly restored over the last three years by Furlonger to its original specification of Verde Pino Metallizzato with Tan Plastica trim, and is one of only 35 cars delivered in this colour.

The Kent-based classic and performance car specialist will also enter the Masters concourse with a Ferrari 599 HGTE, a Ferrari F48, a De Tomaso Pantera GT5 and two Lamborghini Diablos; a VT and an SE 30.

The Salon Privé show takes place from the 23-26 September within the grounds of Blenheim Palace in Oxfordshire. A global automotive event, Salon Privé brings together the world’s most exclusive automotive brands and sought after cars. Tickets can still be purchased via the event website www.salonpriveconcours.com or by calling the ticket hotline on 0808 100 2205.