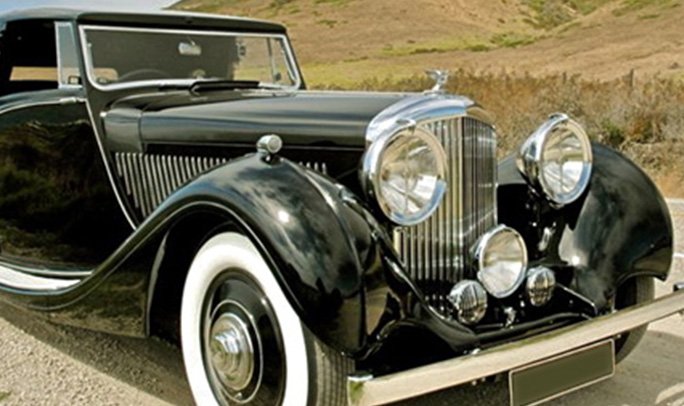 We are excited to present another UK debut, the 1939 Bentley 4.25 Overdrive Fixed Head Sedanca Coupe by Hooper & Co. This particular Derby Bentley happens to be fitted with the last pre-war body built by the renowned coachbuilder Hooper & Co. and is considered by many experts to be the finest Derby Bentley in existence.

Hooper and Company, established in 1805, had a reputation as coachbuilders to royalty. From 1830 until their closure shortly after World War II Hooper & Co held Royal Warrants to the British sovereigns.

One of Hooper & Co’s earliest commissions was for none other than King Edward VII in 1904, a Daimler chassis was the monarch’s body of choice. However this was not Hooper & Co’s last brush with royalty as clients soon included the Emperor of Japan, the King of Egypt and the Shah of Persia. The London Times wrote “Hooper & Co’s list of royal and distinguished patrons is unequalled by any other coachbuilder in the world.” Critical acclaim befitting Hooper & Co’s spectacular coachwork.

Due to the onset of World War II Mrs Duff Asheton-Smith was unable to take delivery of the vehicle. Instead, the car was delivered to the English shipping magnate B.M Mavroleon on November the 12th, 1940. Mr Mavroleon and his cousins established Rethymnis and Kulukundis, a company which was to became synonymous with Greek shipping in the city of London.

In 1942 American diplomat A.J. Drexel-Biddle of the Philadelphia Biddles purchased the car. Mr Biddle served as an Army Major General in World War I and after the war embarked on a successful diplomatic and political career consisting of many varied appointments, namely: Minister to Norway, Ambassador to Poland and finally as Ambassador to a number of governments-in-exile due to the break out of World War II.

The car has a relatively low mileage of just over 66,000 kilometers and is in an extraordinarily preserved condition throughout. Recently the vehicle was extensively re-commissioned by P &A Wood after 50 years in a Museum at a cost of over $70,000.00

“This Hooper Bentley has all the design elements of the classic coupe de ville. It is especially attractive because of the extreme shape of the moulding defined panels. I put it in the class with the Constance Bennet Phanton II by Brewster or the Embiricos Bentley by Van Vooren. It has always been one of my all-time favourite Derby Bentleys.” – Mr Bill Dobson, Head Judge, Pebble Beach Concours.