Raw, visceral, loud, and low, the Morgan Plus 8 GTR represents what the Morgan Motor Company can create when its design and engineering teams let their imaginations run wild. Limited to just nine examples, it marks the first in a line of Morgan special projects set to commence this year.

The Plus 8 GTR explores design themes such as the high shoulder line, not seen on a traditional Morgan body for decades. Its five-spoke centre-lock wheels are reminiscent of Morgan’s 1990s Plus 8 race cars, framed perfectly by subtly re-sculpted wheel arches. Further design elements include a revised rear end, front wings, and front splitter, and the fitment of a hard top. The model also benefits from learning and expertise gained by the company since the Plus 8 officially finished production in 2018. 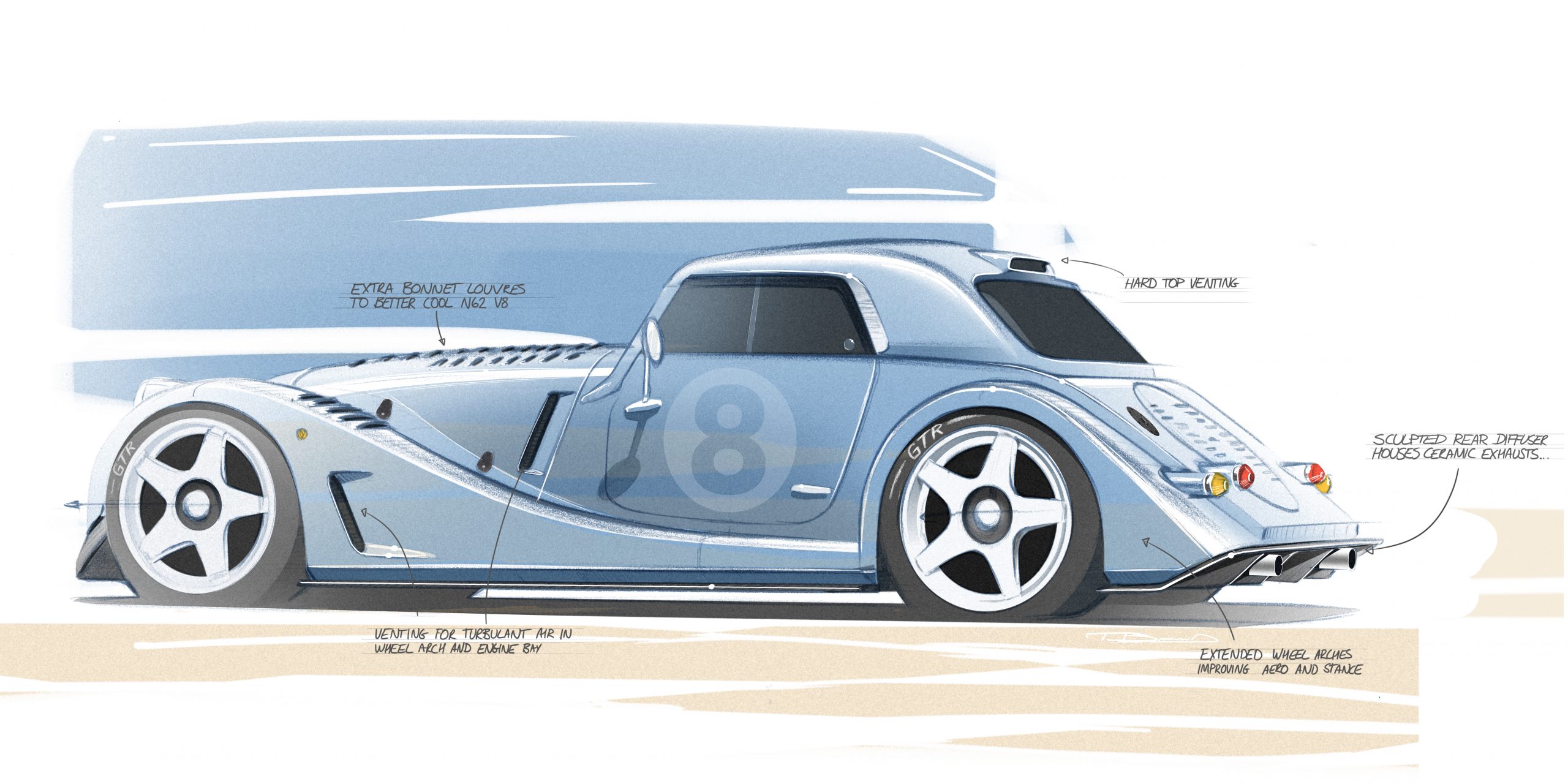 One particular design inspiration was the Plus 8 race car that competed in the GT series throughout the late nineties, more commonly known as ‘Big Blue’. This car served as the testbed for Morgan’s first bonded-aluminium chassis, which would go on to underpin the Aero 8 and ‘Aero-chassis’ Plus 8 models. It seemed fitting, following the recent launch of Morgan’s latest CX-Generation bonded-aluminium platform, to use this opportunity to pay tribute to the car that pioneered Morgan’s use of aluminium structures.

The project has only been possible because of the recent availability of a number of Plus 8 rolling chassis, which have been re-acquired from a third party following a discontinued project. These were all built by Morgan before 2018, and were never used for their intended purposes. All are to be recommissioned and will benefit from the upgrade of selected mechanical components.

As part of their transformation from rolling chassis to finished vehicle, each GTR will be handcrafted using Morgan’s traditional coachbuilding techniques. In a break from over a century of Morgan tradition, much of this work will be completed not at its famous Pickersleigh Road factory, but at the nearby Morgan Design and Engineering Centre (M-DEC). The Plus 8 GTR runs alongside core programmes and is one of several Morgan special projects to be announced this year. It follows numerous special project Morgan models in recent years, such as the Aero GT, SP1 and Aeromax.

These ‘Aero-chassis’ Plus 8s use the Morgan first-generation bonded-aluminium chassis developed initially for the Morgan Aero 8. Previously, from 1968 to 2004, Plus 8 models used Morgan’s traditional steel chassis and were powered by Rover V8 engines.

All ‘Aero-chassis’ Morgan Plus 8s were powered by the BMW N62 4.8-litre engine, and the GTR will be no exception. In its original specification this unit produced 362 bhp, however, the exact power output for the GTR is yet to be finalised. A choice of a six-speed manual or ZF six-speed automatic gearbox will be available, with fixed allocations for each transmission option.

Just nine Morgan Plus 8 GTRs will be built, with production beginning in summer 2021. The transformed special project will be available in certain worldwide markets, subject to local rules on the importation of European vehicles. As part of the special projects programme, customers will be invited to commission their bespoke Plus 8 GTR alongside Morgan’s design team.

Jonathan Wells, Morgan Head of Design, said: “Reviving a V8-powered Morgan at the current time may not seem like the obvious choice for a manufacturer firmly focused on new platforms and powertrains. However, when the opportunity presented itself to recommission a number of rolling chassis and create an exciting special project such as Plus 8 GTR, we embraced it fully. This project has allowed Morgan’s design and engineering teams to revisit some of their favourite elements of past Morgan models, as well as experiment with some features that we hope will appear on future Morgan cars.”