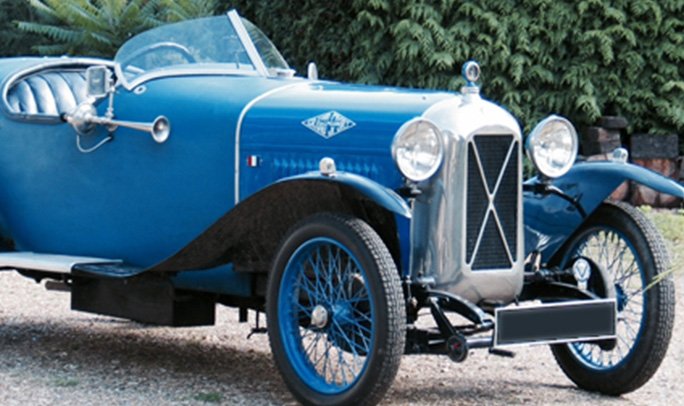 This particular Salmson GS8 is the sister car to the Le Mans racers of 1928 and the most desirable vehicle in the Salmson range. Built on a Grand Prix chassis, there are only 26 known to be in existence worldwide. This is a very rare car and a dramatic example of the pre-war voiturette.

The company was established in Paris by Émile Salmson, as Émile Salmson, Ing. The company manufactured steam-powered compressors and centrifugal pumps for railway and military purposes. In 1896 upon George Canton and George Unné joining the company, Salmson shifted focus, exclusively building petrol-powered lifts and motors. They renamed the company, choosing Émile Salmson & Cie as their trading name.

Initially focusing on the aviation industry, Émile Salmson & Cie made high-quality, purpose-built aircraft engines. This production focus continued pre-WW1 and continued throughout WW2. As soon as WW1 ended, the company diversified even further, building automotive chassis and then complete cars.

The Billancourt factory became the car manufacturing plant directed by Emile Petit. As the firm had no direct automotive design expertise, they started production with the British GN Cyclecar under license, displaying six cars at the 1919 Paris Auto Salon. In 1922 Emile Salmson & Cie decided that the automotive arm of the company should be a separate entity. Société des Moteurs Salmson became their new company for all things automotive.

The first Salmson car used a four-cylinder engine designed by Petit with an unusual valve gear. In terms of its function, a single pushrod actuated both inlet and exhaust valves, pushing to open the exhaust and pulling to open the inlet. This was used in the AL models from 1921 onwards. Later that year, the company built its first twin-overhead-cam engine, which was fitted to the 1922 D-Type.

As noted in Donald Hill’s Salmson register book, this car was restored back to its exact specification in 1992.