The 911 Sport Classic is back, and this time it is coming to the U.S. market. Featuring the distinctive and purpose-driven ducktail spoiler that pays tribute to the 911 Carrera RS 2.7 of the early 1970s, production of the new iteration is limited to 1,250 examples worldwide.

This new, limited-production model is a true driver’s car. It features a unique powertrain to complement its special design, which pays homage to past Porsche models. This is also the second model borne of the Heritage Design strategy, which began with the 911 Targa 4S Heritage Design Edition in 2020.

Because the new model is based on the 911 Turbo S, it too features a comprehensive list of high performance equipment. Porsche Ceramic Composite Brakes (PCCB) with calipers in black, Porsche Dynamic Chassis Control (PDCC), Rear Axle Steering, the Sport Chrono Package, and a specially modified Sport Exhaust system are all included as standard. Porsche Active Suspension Management (PASM) Sport is also standard and lowers the ride height by 10 millimeters. Due to the fact that this is a rear-wheel drive model, the front axle spring rates are slightly decreased by comparison to the all-wheel drive 911 Turbo S. 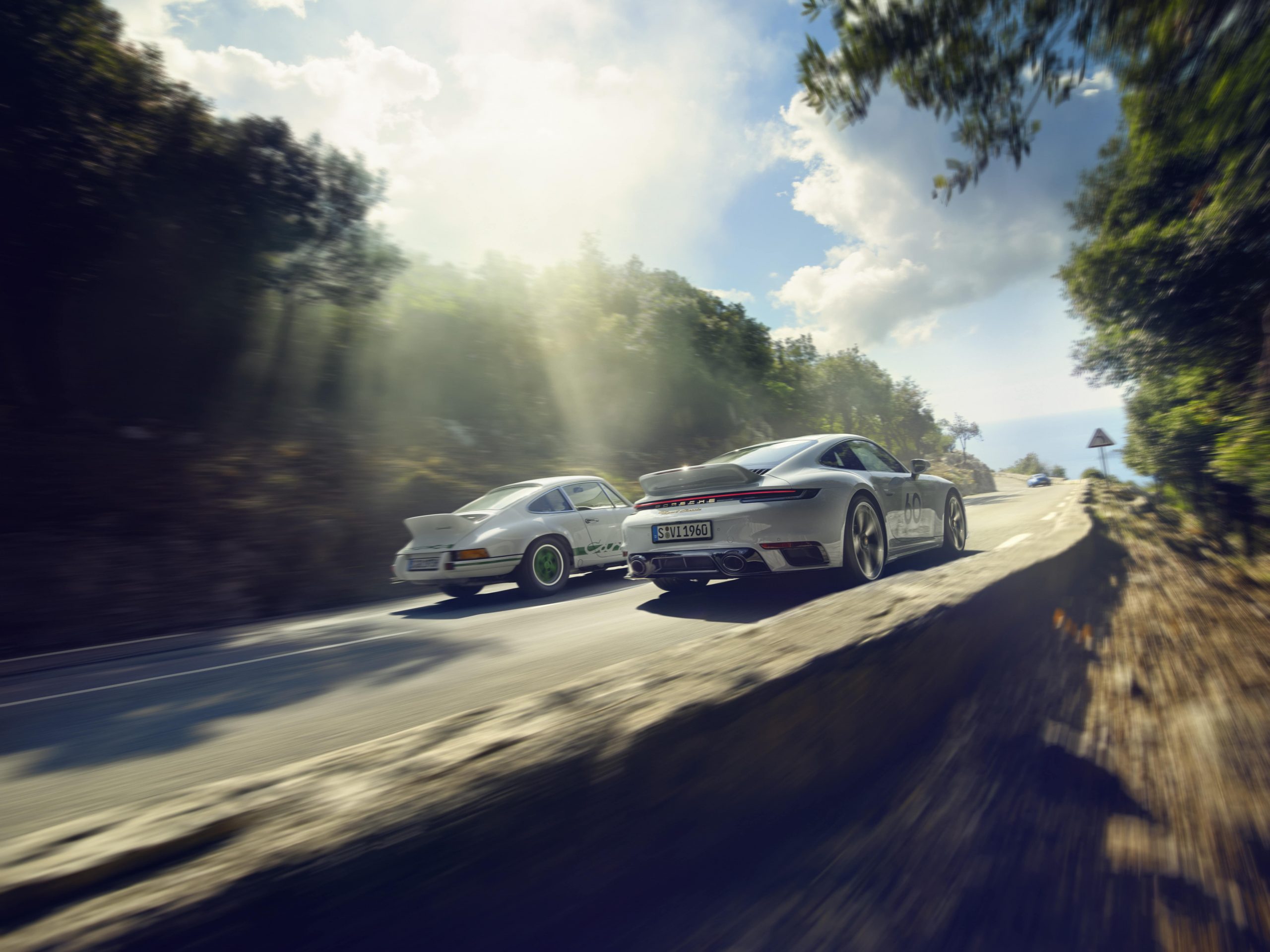 Despite its undeniable sports car pedigree, the 911 Sport Classic is designed with driver enjoyment in mind and while it’s certainly up to the task of turning quick track laps, this limited-edition model emphasizes style and driving pleasure above all else.

Second Heritage Design Edition model as part of Heritage Design strategy
This is the second in a series of four Heritage Design models where the 911 Targa 4S Heritage Design Edition was the first. The 911 Sport Classic shares certain design traits with that model including a heritage inspired Porsche crest nearly identical to the version from 1963, badges and PORSCHE lettering finished in real gold and special Exclusive Manufaktur badges on the front quarter panels. Finally, a Porsche Heritage badge fixed to the intake grille at the rear references the Porsche 356 badge that was awarded in the 1950s when a vehicle reached the 100,000 kilometer mark.

A special twist on classic style
Its striking body is based on the 911 Turbo, but with several elements that are unique including Sport Grey Metallic paint and painted contrasting stripes in light Sport Grey. Drawing inspiration from Fashion Grey, a color first applied to the Porsche 356, this color was created for the new 911 Sport Classic. Customers may also specify the 911 Sport Classic in Black (non-metallic), Agate Grey Metallic, or Gentian Blue Metallic.

Many design elements of the new 911 Sport Classic are unique to the limited model. Starting with the front, a fixed spoiler lip and LED-Matrix Design headlights in Black contribute to its purposeful appearance. The carbon fiber reinforced plastic (CFRP) hood – not offered on the 911 Turbo models – dips in the center. That indentation complements a CFRP double-bubble roof that is also special to the model and a design continuance of the first 911 Sport Classic dating back to the Type-997 generation. 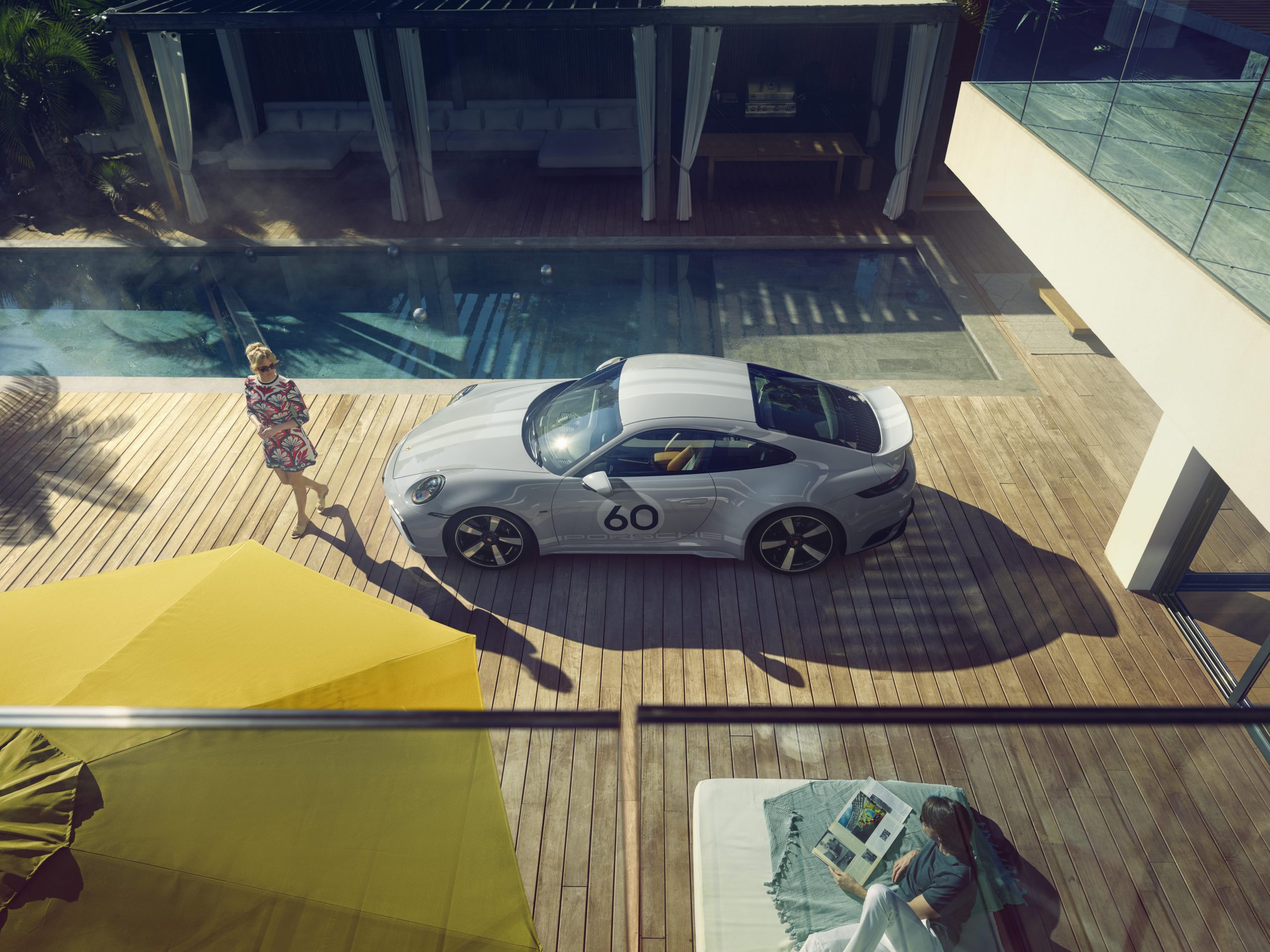 Graphics along the sides further distinguish the car. These include PORSCHE script and a white lollipop that customers can specify with digits between 1 and 99 at no additional cost. These are intentionally applied as decals rather than paint so they may be removed in the future should the owner prefer to do so.

The 911 Sport Classic wheels, too, are special and unique to this car. As a modern re-interpretation of the Fuchs design, they are another nod to Porsche heritage. In this case, they use a center lock hub and measure 20 / 21 inches front and rear with tires measuring 255/35 ZR20 and 315/30 ZR21.

The most significant design elements can be seen at the rear of the car. Here, the wider rear fenders of the 911 Turbo gain even more visual emphasis. Where those panels usually have large cutouts for air intakes associated with the 911 Turbo, the 911 Sport Classic has no such intakes. This creates a large, smooth surface and a very clean appearance. It might seem like a small change, but deleting the intakes required significant engineering work, and new tooling to stamp the panel, which runs from underneath the front of the car doors to the rear of the vehicle. Due to the eliminated air intakes, ducts underneath the ducktail spoiler channel combustion air to the engine while charge air continues to route through the grille above the engine for cooling. Finally, a large ducktail spoiler formed from CFRP gives a flourish of classic design DNA reminiscent of the 1972 and 1973 911 Carrera RS 2.7.

An interior with classic ambiance
The interior is equally as special as the exterior with materials meant to call back the 1960s and early 1970s including seat centers and door panels with Pepita cloth upholstery. The standard interior of this model uses semi-aniline leather in black and Classic Cognac. This is the first time since the 918 Spyder that Porsche has used this particularly supple and natural feeling grade of leather. A single-tone black leather interior is also optionally available. 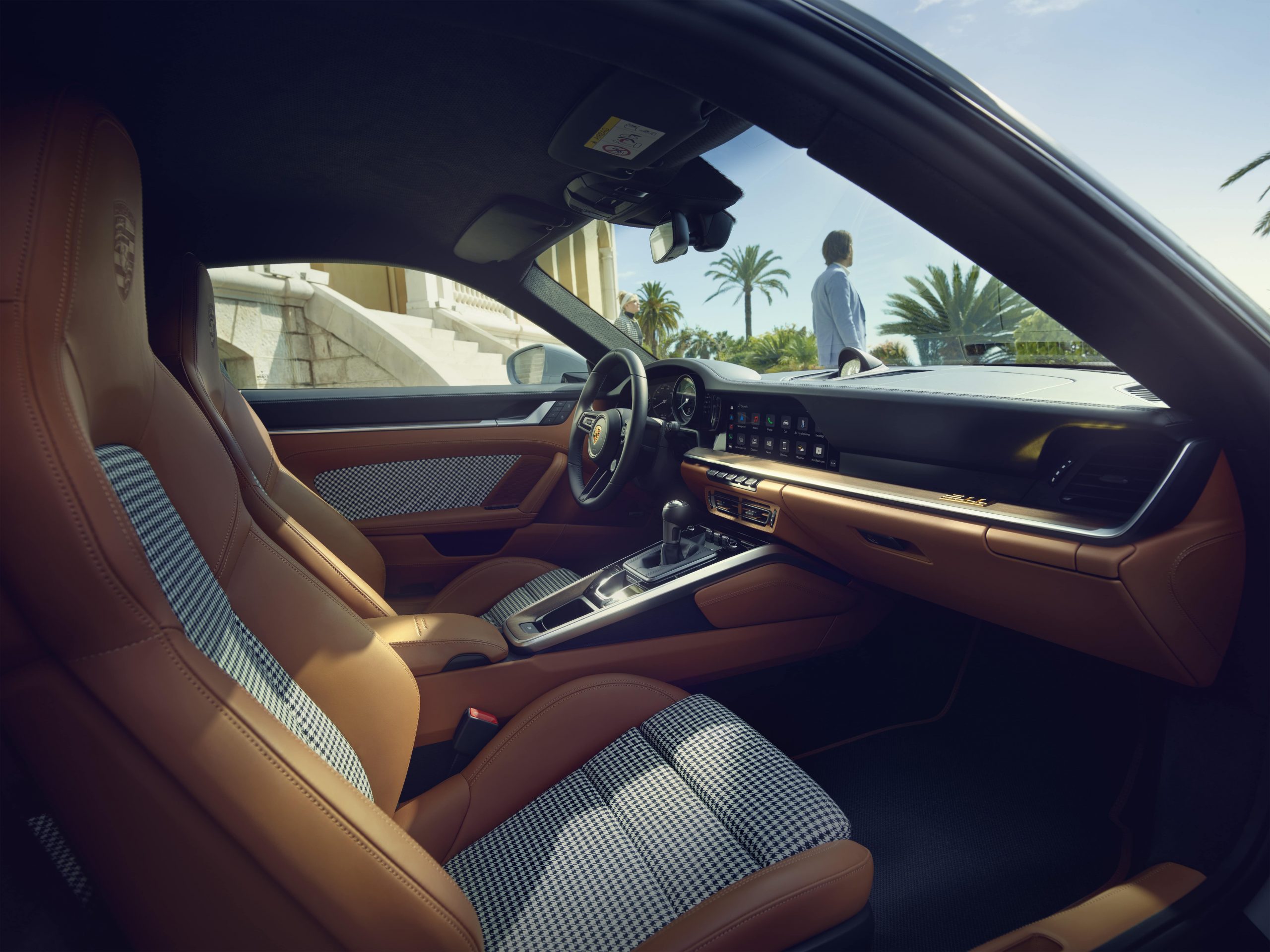 Open-pore, dark Paldao wood trim is also standard equipment in this car as a contrast to the light Classic Cognac color. A badge on the passenger side of the dashboard above the glovebox enumerates each example in the 1,250-unit production run.

Little details throughout the interior set this car apart. The central, analog tachometer also provides retro style with a white needle and scale markings alongside green numbers and accents. The Sport Chrono clock in the dashboard gets the same treatment. The center console lid is embossed with the Porsche Exclusive Manufaktur logo, while the headrests are embossed with the Porsche Crest. The door sill plates are also specific to this model, featuring the 911 Sport Classic logo. The sun visors, steering column and even the air vent slats are upholstered in leather. Perforated Race-Tex fabric makes up the headliner and covers the A-, B- and C-Pillars.

In addition to a owning a limited-edition model, 911 Sport Classic owners become eligible to purchase a unique watch from Porsche Design. The dial on the Chronograph 911 Sport Classic is configurable to match the vehicle. One option is a matte black Heritage Design dial. The green digits and scale markings, and the white hands are based on the tachometer in the vehicle. Alternatively, the watch dial is available with either the Sport Classic stripes in light Sport Grey or Pepita. 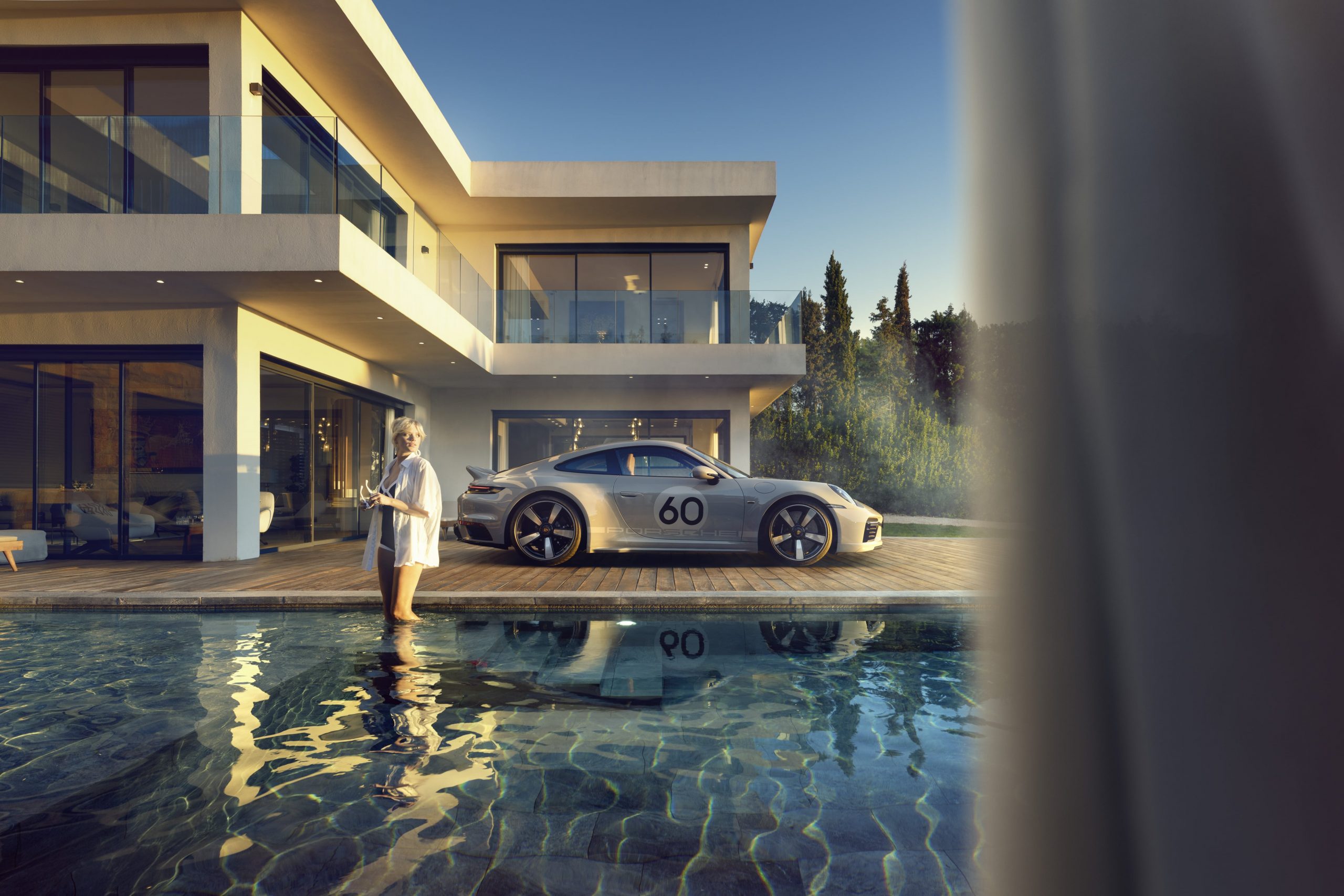 Like the Porsche logo at the rear of the car or the badge in the interior, the Porsche Design logo on the dial is made of gold. There is more gold-coloured lettering on the seconds dial, which reads “911 Sport Classic Lim. Series.”

The design of the winding rotor draws inspiration from the wheels of the vehicle, and includes a cover that looks like the center-lock nut. It also bears the classic Porsche crest. The two wristbands included in the set – one in Black, one in Classic Cognac – also draw parallels with the vehicle. They are made from the same leather as the upholstery in the vehicle interior and feature an embossed “911.”

The 911 Sport Classic will be available in the United States as part of the 2023 model year. Dealer arrival is expected in late 2022. Pricing information will be announced closer to market arrival.