The first day of Salon Privé has opened with some of the most anticipated debuts of the year, lining up alongside timeless classics and automotive icons, with global, European and UK debuts all taking place on the manicured lawns of the historic Blenheim Palace.

As the must-attend automotive event marks its 17th year, a spectacular start saw Salon Privé feature the global debut of the Engler Desat, the European debut of the Hennessey Venom F5 Roadster and the UK debuts of the DEUS Automobiles Vayanne hypercar and the Rolls-Royce Phantom Series II.

Firmly established as the UK’s most exclusive automotive event, with plenty to see and do, the five days of Salon Privé offer an unrivalled opportunity to experience the unique, rare and historic alongside the cutting-edge technology that features in today’s most desirable models.

Following the debuts held in front of the world’s media, the five-day event is now open at Blenheim Palace with tickets available online. This includes the public Salon Privé Classic & Supercar event on Sunday 4 September with its ‘Live on the Drive’ Hill Sprint action.

The sensational Aston Martin Valhalla takes a starring role at Salon Privé this year. Combining intense performance with pinpoint dynamics for unprecedented driver involvement and driving experience, the Valhalla draws on expertise forged in Formula One to perfect the chassis, aerodynamics and electronics and create a technological tour de force.

The British company is also showing the Aston Martin DBX707, the world’s most powerful luxury SUV. The leader in its segment, it provides a unique combination of blistering speed, supreme dynamics, unmistakable style and absolute luxury.

Priced at £185k, the ready-to-roll model will top the MkIII range with customers able to specify other MkIII variants for import starting from £135k.

Making its UK debut, the all-new, all-electric DEUS Automobiles Vayanne hypercar has brought cutting-edge technology to Salon Privé, hot on the heels of its appearance at Monterey Car Week and Pebble Beach.

Providing hypercar-level performance but with luxury sensibilities, such as comfort, practical storage, and daily usability – a first in the competitive hypercar class – the 2,200 bhp, pure electric Vayanne is on display on the South Lawn.

Named as the most powerful pure electric hypercar in the world, the DEUS Vayanne has been designed, developed, and tested in conjunction with revered technical partners Italdesign and Williams Advanced Engineering – with both companies proudly supporting the car’s unveiling at Blenheim Palace.

The global debut of the new Engler Desat, the dramatic evolution of the Slovakian company’s Superquad concept, also took place on the opening day of Salon Privé.

With a unique livery and jaw-dropping performance, the new 2022 Engler Desat was unveiled to press and media, and will make a dynamic appearance in the Salon Privé Classic and Supercar runs on Sunday 4 September.

The brainchild of Victor Engler, founder of Engler Automotive Limited, the Desat is the culmination of his determination to engineer and build his own vehicle. Starting with a unique vision, combined with 30-years’ experience, the result is the world’s only Superquad vehicle – a ground-breaking machine with uncompromising performance and dynamics.

Ferrari
There’s a unique opportunity to see the evolution of the species, as the Ferraris on show with dealer, Dick Lovett Swindon, encompass both the birth and one of the latest creations of the marque.

After leading much of Alfa Romeo’s pre-war Grand Prix success, Enzo Ferrari founded Ferrari S.p.A in 1947, and the 125 S presented on Blenheim’s South Lawn is the actual car that launched the Ferrari legend – being the very first to emerge from the Maranello factory.

One of the latest in the Prancing Horse’s bloodline, the 296 GTB, is also at the Palace. The first Ferrari road car with rear-wheel drive plug-in (PHEV) hybrid architecture, it features an exceptionally wide V6 engine design. With the internal combustion unit integrated with a single electric motor, the Ferrari is afforded 818 bhp and 0-62 mph acceleration time 2.9 secs.

A host of hallowed Ferrari models are competing in the Salon Privé Concours d’Elégance presented by Aviva and the Ferrari 125 S will also star in Sunday’s ‘Live on the Drive’ action as part of the ‘Ferrari 75th Anniversary Tribute’.

Hennessey
Fresh from its reveal, just days ago in California, the Hennessey Venom F5 Roadster is proving to be a highlight of this year’s show at Blenheim Palace as it makes its European debut. 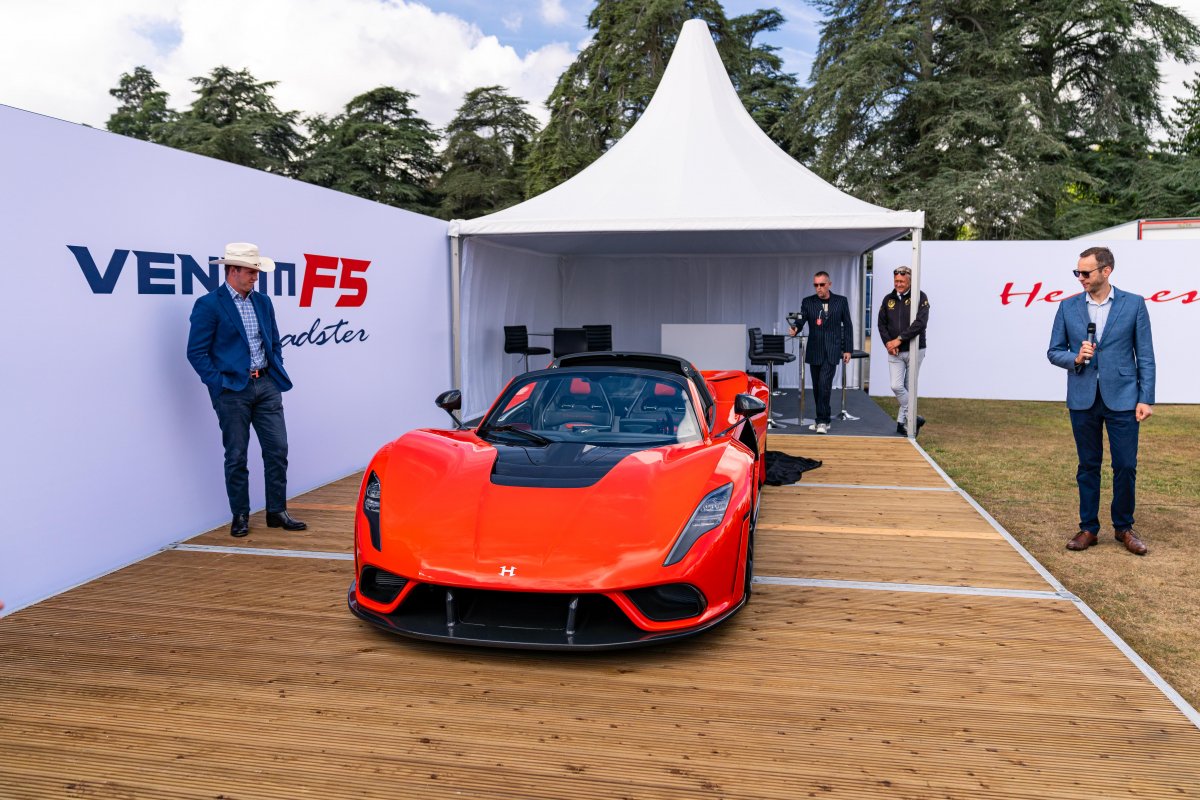 Appearing courtesy of dealer Clive Sutton, the car is based on the Hennessey Venom F5 Coupe, but is designed to offer unparalleled performance and the world’s most exhilarating open-air driving experience. Mid-mounted in the carbon fibre monocoque chassis is Hennessey’s twin-turbocharged, 6.6-litre ‘Fury’ engine, rated at an astonishing 1,817 bhp. Hennessey confidently predicts that the Venom F5 Roadster will surpass the company’s own ‘world’s fastest convertible’ record – 265.6 mph – currently held by the Hennessey Venom GT Spyder.

JLR SVO
The Range Rover SV Electric Hybrid is on show at Salon Privé this year, combining the refinement of a six-cylinder Ingenium petrol engine with the power of a 38.2kWh lithium-ion battery. The 510PS extended range plug-in electric hybrid (PHEV) model of the brand’s flagship vehicle provides up to 69 miles (111 km) of near-silent pure-electric driving.

Nardone Automotive
Reimagining the only sports car to ever win the hallowed Car of the Year title, the Nardone Automotive Porsche 928 at Blenheim Palace is the French company’s first vehicle and elevates the oft-overlooked two-door to hero status. 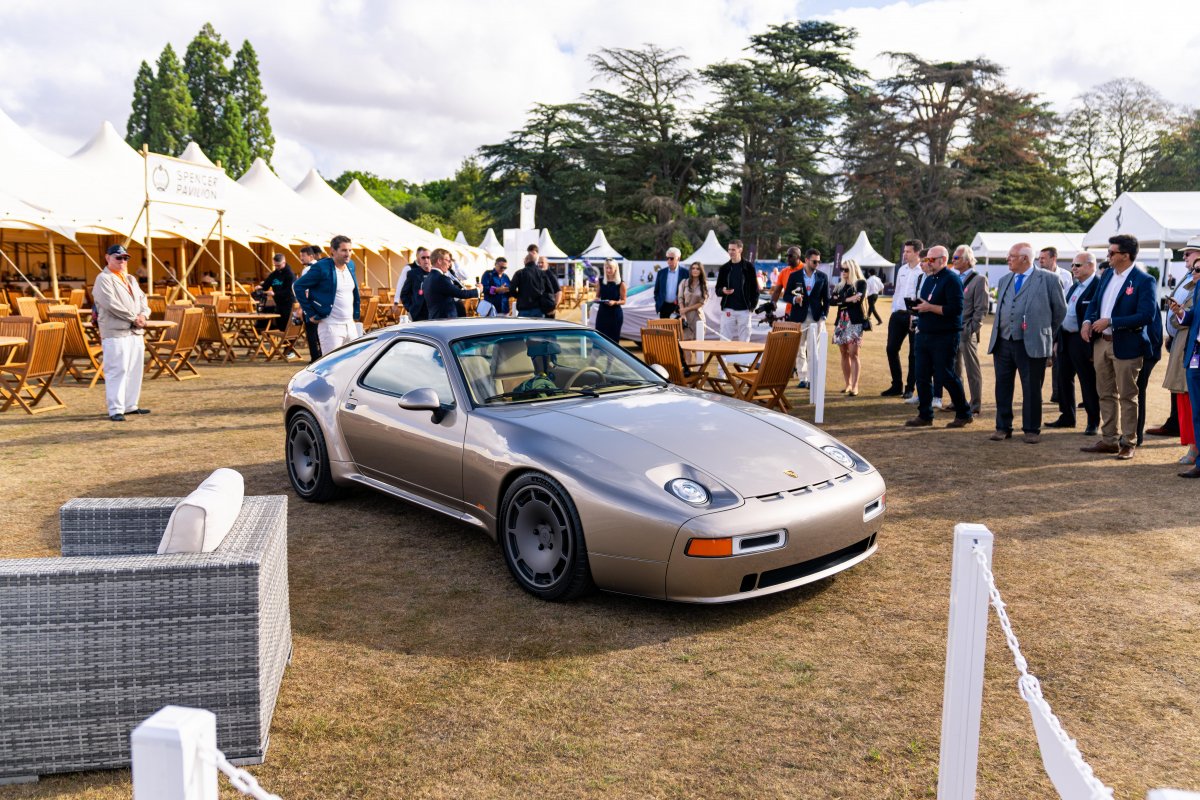 Released earlier this year, Nardone’s mission is to realise the full potential of the 45-year-old design, building something fit for the 21st century, which combines comfort, performance and contemporary luxury.

Taking the 1978 grand tourer as its starting point, Nardone carry out a series of changes to the car to transform it into a special and tailor-made GT. Modifications inside and out include decluttered lines and bodywork made almost entirely of composite materials, while the V8 gets a performance boost to an anticipated 400 bhp, and a six-speed manual gearbox and limited-slip differential are introduced.

Radical
With a shared passion for exhilarating motorsport experiences, Salon Privé was the perfect setting for Radical Motorsports to showcase its latest models. Founded in 1997, Radical Motorsport has continued to develop and innovate across the racing scene, with the introduction of new technologies and processes to its models, as well as providing a platform for competitors with its globally-recognised racing series.

The British company is showing the SR10 and SR3 XX models and discussing the brand-new Cockpit Safety Structure – available as an option for the first time. The newly developed halo-inspired safety structure improves the safety of occupants, maximises strength without a major weight gain, and minimises aerodynamic drag to boost fuel efficiency and overall performance.

The Radicals will also wow the crowd as part of the ‘Live on the Drive’ Hill Sprint on Sunday 4 September.

Rolls-Royce Motor Cars
The perfect place for the Phantom Series II to make its UK public debut, Blenheim Palace hosted Rolls-Royce’s magnum opus in what is considered the pinnacle of the marque’s design, engineering, and craftsmanship.

Occupying a unique position, at the apex of the luxury world, the Phantom Series II is a new expression of the eighth generation model which has seen Rolls-Royce designers and engineers guided by clients. Requested not to make major changes to the already iconic motor car, they’ve made the lightest of design touches, embellishments and adaptations as part of an intense process focussing on what should be preserved and protected.

The company is also showcasing a Bespoke Black Badge Ghost, a testament to Rolls-Royce’s peerless fluency in perfectly tailored cars, indicative of the extensive scope of the marque’s craft, design and engineering competencies.

The Platinum Collection
To celebrate Her Majesty The Queen’s 70th Jubilee this year, Salon Privé has curated a display of spectacular, as well as rare, platinum and silver-coloured motor cars of all ages. The Platinum Collection features 16 iconic models from marques including: Aston Martin, Bugatti, Ferrari, Jaguar, Lamborghini, McLaren, Morgan, Porsche, Rolls-Royce and Wiesmann, it’s a must see at this year’s Salon Privé at Blenheim Palace. 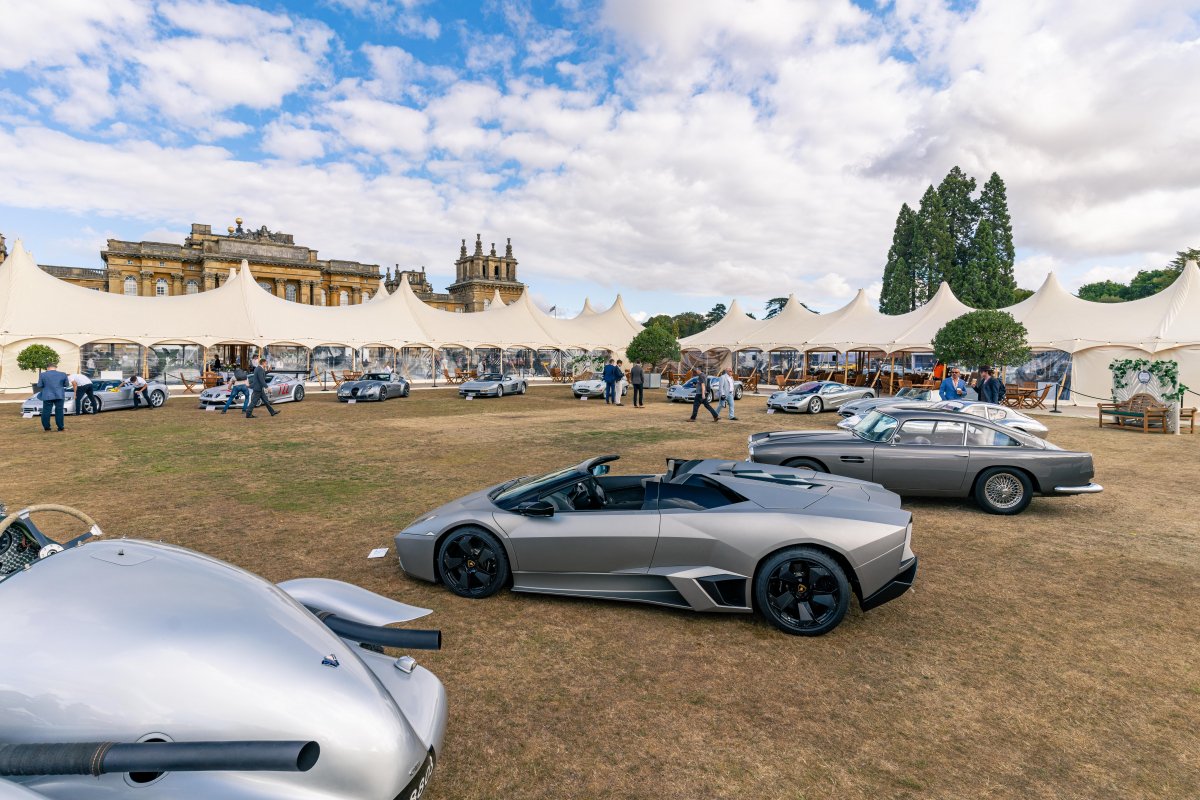 Highlights include not one, but two outstanding McLaren F1s – chassis 063 and 064 – demonstrating meticulous work carried out by MSO, the first official production Bugatti EB110 Super Sport, Chassis #01 ordered new by the Sultan of Brunei, and the only official Ferrari Testarossa Spider produced, a custom order in 1986 for the then-Fiat Chairman, Gianni Agnelli.

From its early wins with the Porsche SC RS, to the firm’s iconic relationship with Subaru – netting multiple Drivers’ Championships in the 1990’s and the 2000’s – rally stars on show include Group A Legacy and Impreza, an Impreza WRC99, the title-winning Imprezas from the 2001 and 2003 seasons, and a MINI WRC.

The other side of the Legends display pays tribute to its GT racers, beginning with the Ferrari 550 and including Prodrive’s fruitful relationship with Aston Martin. From the DBRS9 all the way up to the latest GT3-spec Vantage, the spread includes the Vantage GTE, which has won its class at the Le Mans 24 Hours three times in the past five years. 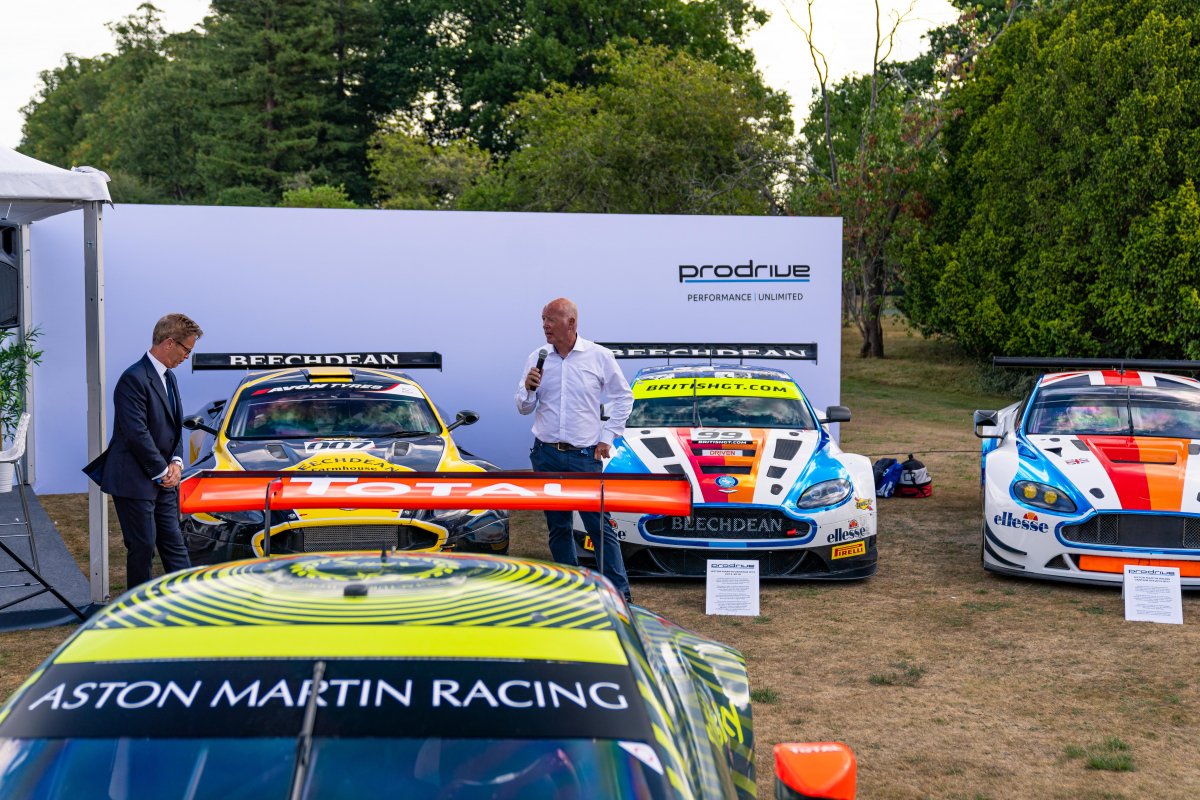 At the centre to the Prodrive Legends display is the revolutionary Hunter – the world’s first all-terrain hypercar, developed from the Bahrain Raid Xtreme competition, driven by Sébastien Loeb on the world’s toughest motorsport event: the Dakar.

The brand-new Prodrive Racing Simulator is making its public debut at Salon Privé, developed with design house CALLUM to blend cutting-edge computer technology with clean, elegant styling. A birch canopy surrounds a carbon fibre monocoque, with the intention to create a simulator that would have the aesthetic appeal of a piece of fine furniture rather than something hidden away in a corner.

Three of the cars will take part in the ‘Live on the Drive’ Hill Sprint, part of Classic & Supercar Day on Sunday 4 September and visitors will see the ex-Colin McRae Group A Impreza, the MINI WRC and the Hunter in action.

Viritech
The world’s first hydrogen hypercar, the Apricale, makes its Salon Privé debut this year. A showcase of hydrogen technology, it’s been styled by Pininfarina but developed by Viritech. The FCEV hydrogen powertrain delivers 1,000 bhp in a hypercar weighing under 1,000kg and production is starting in 2024, with a limited run of only 25 cars. 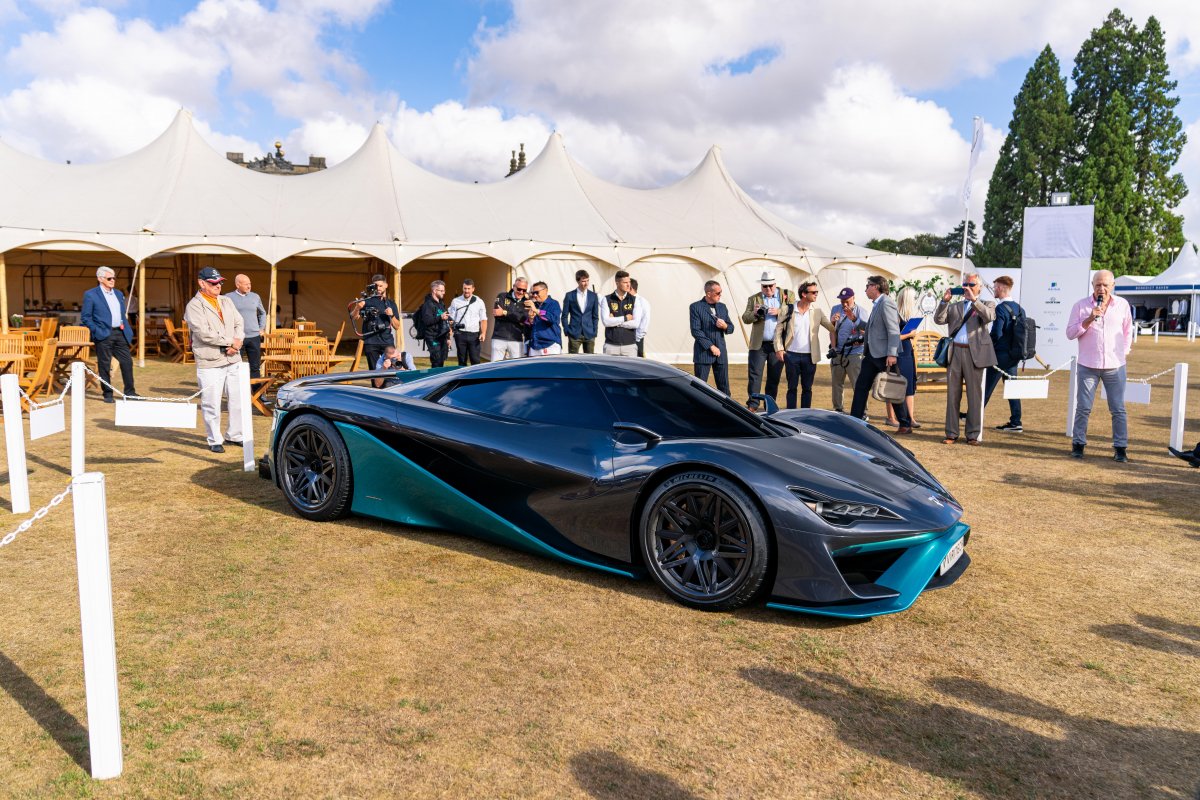 The ambition to overcome all the compromises of zero-emission vehicles required Viritech’s engineers to completely reconsider how fuel cells and batteries function together. The car itself represents a revolution, as the only hypercar with a zero- emissions powertrain whose weight is the same as a petrol-powered equivalent. This means it’s half of the weight of some battery electric vehicle equivalents.

Tickets for Salon Privé at Blenheim Palace are on sale now www.salonpriveconcours.com/buy-tickets/ 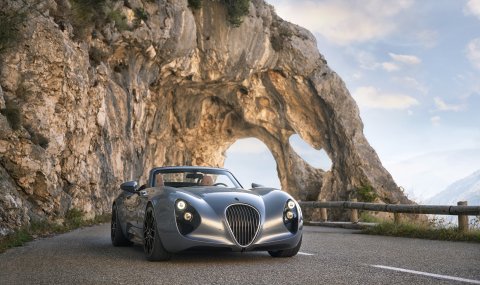 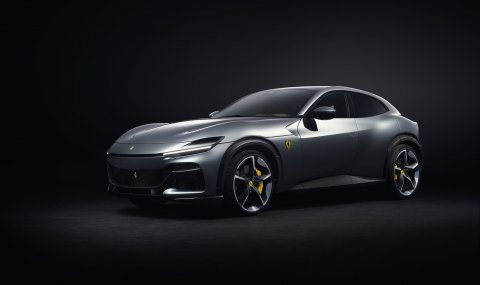