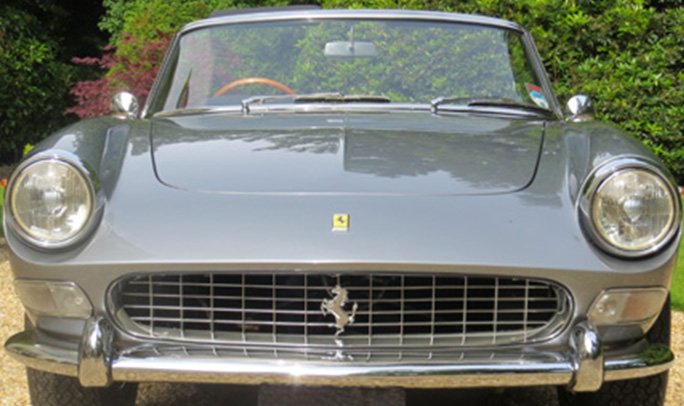 #07681 is a fine example of the very rare RHD Ferrari 275 GTS.  This particular Ferrari is well respected both in the UK and internationally, mainly for the sheer quality of its rebuild – undertaken between 2005-2007. Having recently been subjected to a complete aesthetic overhaul, the car is in pristine condition and ready for Salon Privé’s renowned Concours showfield.

The GTS effortlessly married a fusion of Pininfarina’s tried and tested features and aesthetically bore no resemblance to the Berlinetta. Built by Pininfarina in Turin and constructed from steel and alloys, the GTS was an advanced vehicle for its time. Aluminium doors kept the overall weight down – as did the aluminium bonnet and boot lid!

The open headlights, boat-like tail, full-width front bumper and elegant quarter units at the rear, combine to form a quite beautiful silhouette. The interior boasts Connolly leather trimmed seats, which were also less heavily bolstered than the GTB’s.

Replacing the Series II 250 GT PF Cabriolet, The 275 GTS was launched alongside the 275 GTB at October 1964’s Paris Auto Salon.

#07681 was first licensed in 1965 to an address in Belgrave Square, London. Factory records indicate that this GTS is the 12th RHD car produced of a run of 19. Between the years of 1965 and 2002 the car had 9 owners in total. The car also enjoyed a 4 year stay in Australia in the 1990’s. A well-travelled vehicle indeed!

Purchased in 2002 by its current owner, the car underwent a complete nuts and bolts restoration in 2005, taking 2 years to complete. The high quality of the restoration secured #07681 the famed Ferrari Classiche Certification, as well as a class win at the prestigious Ferrari Owners Club National Concours at Broughton Castle in 2007.

Further accolades followed in 2008, winning the Roy Taylor Trophy, the John Tate Cup, the Presidents’ Cup for the Champion of Champions Class and ‘Car of Show’ at the Ferrari Owners’ Club National Concours at Walton Hall. Later that year, the 275 formed part of the Autoglym Invitation Concours at the MPH Show, Earls Court and won ‘Car of Show’.

The car continues to appear in various automotive shows throughout the UK, but has not been entered into a Concours competition since 2008. Salon Privé is delighted to welcome this resplendent 275 to our incredible Concours showfield.