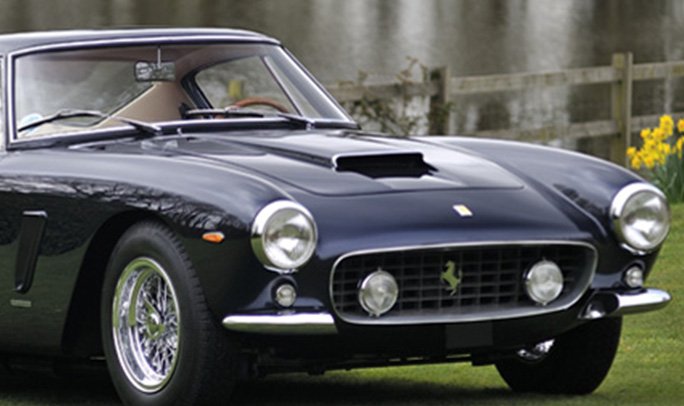 The Allen’s are no strangers to Salon Privé with Sarah’s impressive 1959 Ferrari 250 California Spyder LWB attaining 1st place in the ‘Wind in Your Hair’ class, in 2013. The accolades do not stop there – as the ‘Cal Spyder’ also won ‘Best in Show’ – rounding off a superb performance and cementing its place as one of the finest Ferraris in the world.  Nigel returns this year, this time with his beautiful 250 GT SWB. The 250 GT SWB Berlinetta was the last great, ‘true’ gran turismo built in quantity by Ferrari. The car was immediately successful on the track and was the dominant Ferrari until it was usurped by its heir, the illustrious 250 GTO. Its competition success is renowned and includes GT category wins at Le Mans in 1960 and 1961, Tour de France wins in 1960, 1961 and 1962 and the Stirling Moss’ pair of Goodwood Tourist Trophy wins in 1960 and 1961.

Ferrari enthusiasts the world over consider it one of the marque’s supreme and most desired gran turismos because of its extraordinary racing pedigree and sculpted, artful design. The body remains attractive regardless of viewing angles, executing the classic design philosophy of restraint alongside clarity of form that is not compromised by frivolity. Timeless.

With only 5 owners since new its current custodian, Nigel Allen, is hoping it will bring similar successes in 2014 to those enjoyed the previous year. The car has already appeared at Salon Privé in some capacity, being entered into the 2013 Chubb Insurance Tour d’Elégance, and after the tour was immediately entered into the Ferrari Classiche Programme. It has since been subjected to an extensive restoration project of the highest standards by Barkaways with additional assistance from Bodylines Coachbuilders and Medcalf & Co, the interior has been re-trimmed by O’Rourke Coach trimmers.

The car is finished in a spectacular deep blue, namely Blue Notte Metallizato, a period Ferrari colour. The interior is finished in Bordeaux Red Vaumol by Connelly leather  – VM3086.  All original features have been renovated and restored, which is of course an essential requirement of the Ferrari Classiche Programme. A stunning example that sounds as good as it looks – as only Italian gran turismos can.