Project Thunderball is Wiesmann’s response to the electrified vehicle revolution, also marking a revolution at the heart of its brand, for the first time combining the remarkable characteristics of an electric powertrain with the trademark performance, driving pleasure and styling of a true Wiesmann. 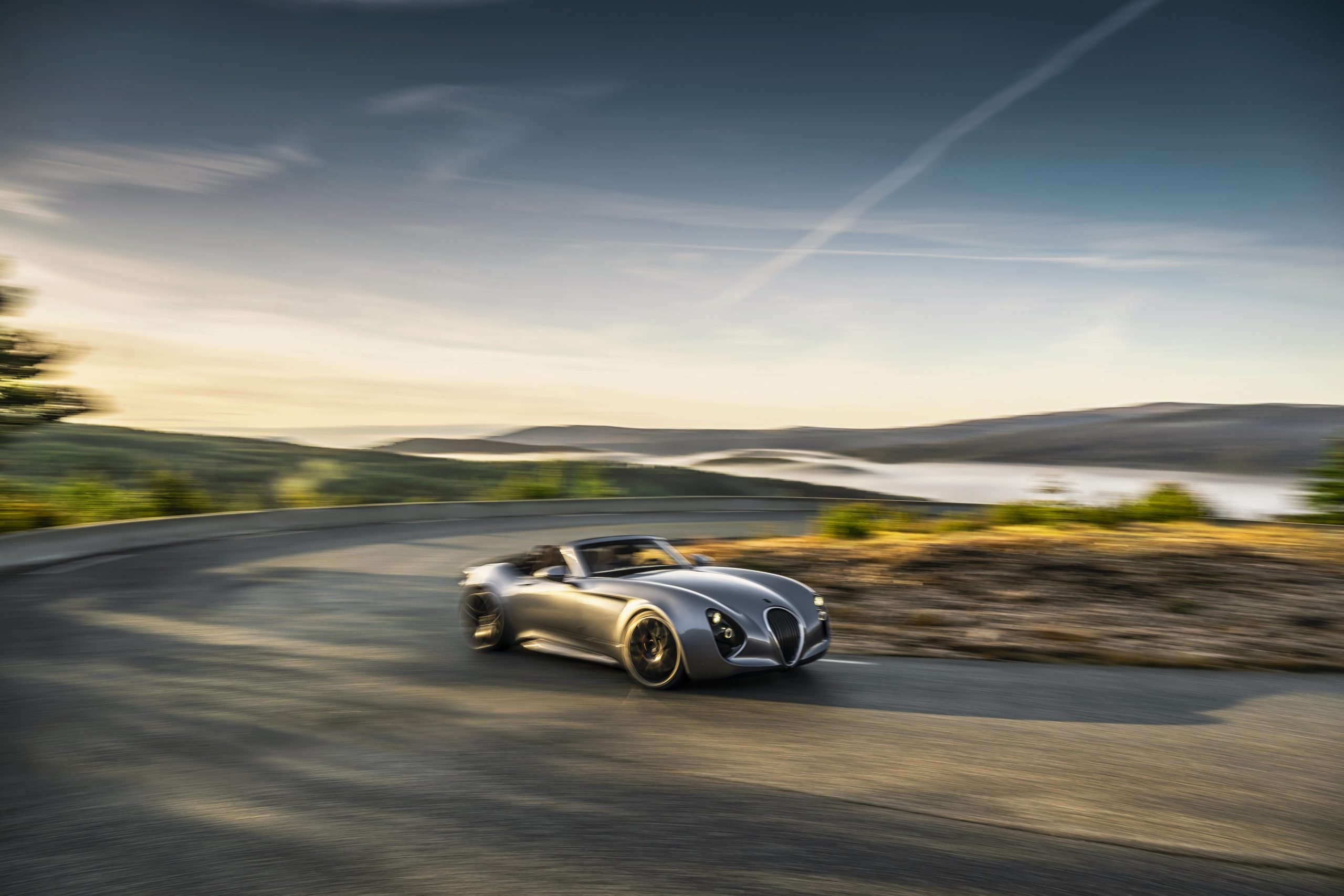 Project Thunderball’s performance credentials are indisputable. Power comes from twin electric rear-mid mounted motors delivering up to 500kW (680hp) to the rear wheels and 1100 Nm of torque, bringing phenomenal straight-line performance and a targeted 0-62mph (0-100km/h) sprint acceleration time of 2.9 seconds, for an unrivalled exhilarating drive which the owner will never tire of.

Finely crafted from advanced carbon fibre, Project Thunderball astonishingly weighs in at little more than 1700kg (3747lb), with a power to weight ratio of 2.5kg per HP, bringing remarkable agility and handling more than worthy of the Wiesmann badge. The target range of Project Thunderball is 500km, thanks to its state-of-the-art 800V high-voltage architecture providing a maximum 92kWh battery capacity (83kWh available) – uniquely high for a roadster. The car can be charged with its 22kW onboard unit at the owner’s home, or extremely fast with up to 300kW DC fast charging at a rapid charge public charger. 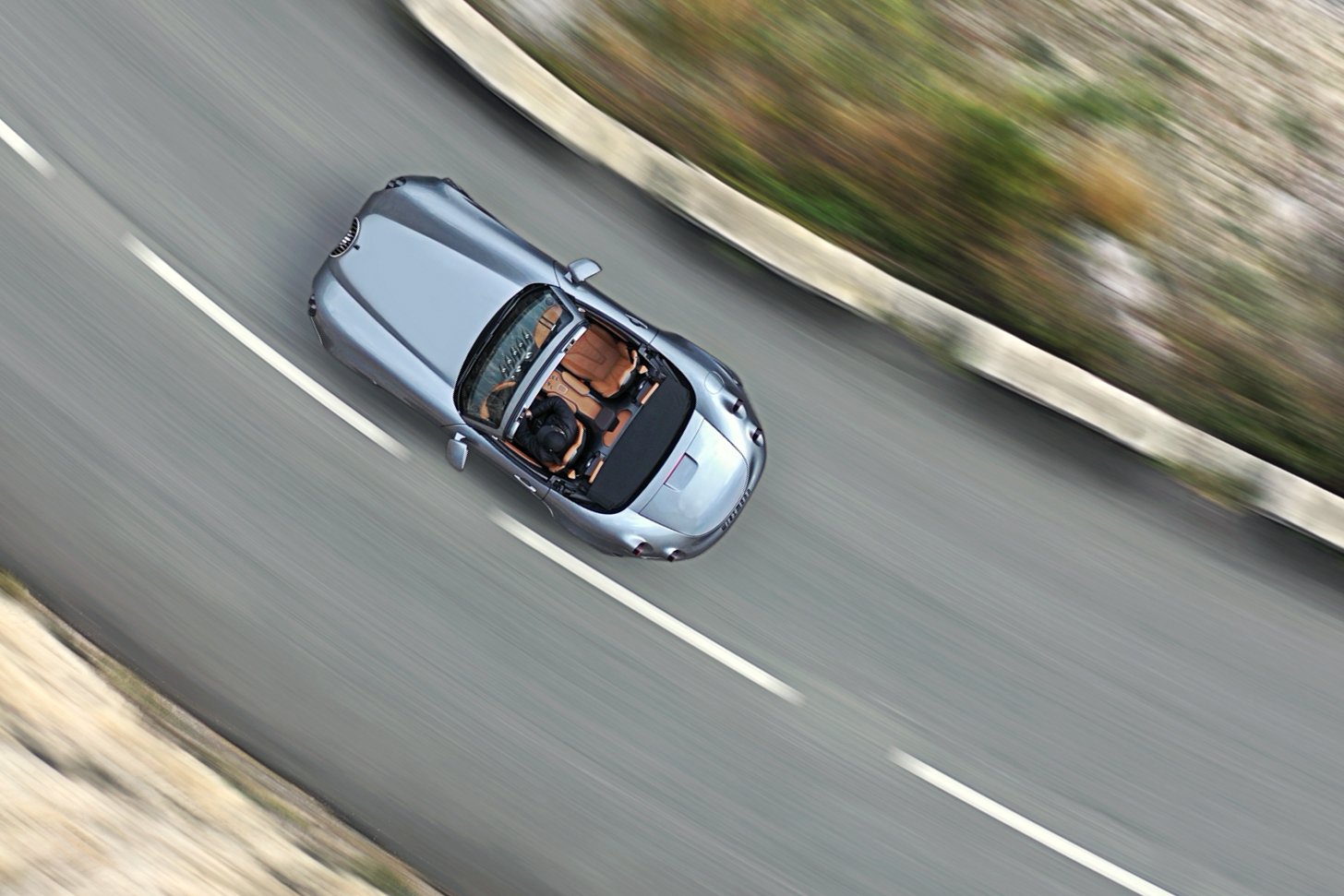 Making the very most of Project Thunderball’s advanced electric powertrain to achieve the trademark Wiesmann driving feel, steering wheel-mounted paddles allow instant adjustment of the car’s unique Wiesmann Intelligent Regenerative Braking System. Developed specifically for Project Thunderball using some of the best engineering expertise in the industry, the system embodies the car’s ethos of timeless design and styling meeting cutting-edge innovation, setting the standard for future developments.  With five settings available, the driver can change the twin electric motors’ regenerative braking feel to give a powerful engine braking effect into corners, recharging the battery and allowing optimum use and minimal waste of energy. In the true spirit of Wiesmann’s ‘Drivers’ car’ DNA, a change in setting gives a purposeful moment of enjoyment to the driver, something lacking in most EVs on the market today.

In another unique driver-oriented feature for Project Thunderball, the charge display shows how fast the car is charging specifically to the kilometre, rather than to the percentage of total charge, allowing the driver a simple calculation of the optimal charge level for each specific journey. Its integrated DC fast-charging system makes for convenient and efficient recharge, while its combined AC and water-glycol cooled battery is optimised to be charged at high ambient temperatures. 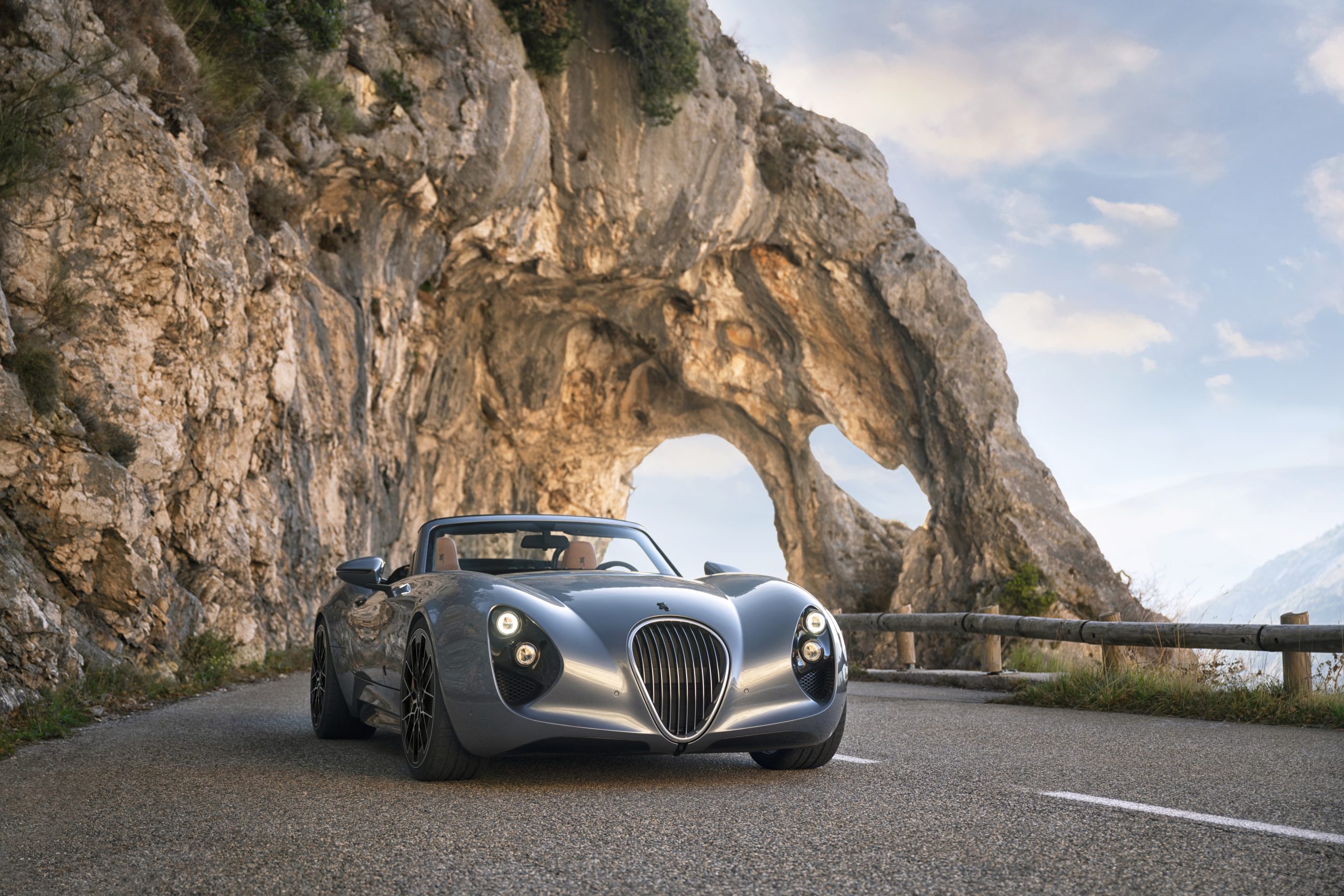 Project Thunderball marks the return of Wiesmann under the ownership of international entrepreneur, Roheen Berry. Roheen comments: “Project Thunderball is a remarkable moment in time for the Wiesmann brand, and the culmination of a dream of years of design and engineering excellence bringing an all-rear-wheel-drive electric convertible sports car fit for the modern era, where timeless design meets cutting-edge technology. For the first time an iconic two-seater Wiesmann will deliver the performance, handling and spirit for which we are famed, with an advanced, German-engineered all-electric powertrain at its heart. I truly believe we’ve made the world’s most exciting electric sports car.”

Project Thunderball promises to be a sports car befitting the modern era, yet fiercely retaining the Wiesmann DNA of timeless design elegance combined with stunning yet refined performance. Classic roadster proportions of an elongated hood, short front and long rear overhangs give a muscular front view, pointing to its athletic performance credentials. A three-part clean front with a prominent familiar grill and large light cut-outs give a striking appearance, with the huge one-piece clam shell bonnet, reminiscent of a bygone era, opening to reveal the beating heart of the car. Pronounced air outlets to the front and rear and a moulded rear spoiler further emphasise its sports car character, as does the line running across the hood, extending dynamically to the rear.

Turning to the inside, Project Thunderball’s beautiful cabin continues the theme of heritage-driven familiarity meeting an all-electric roadster built for the 21st century, with a consistent seamless feel between interior and exterior. This is an interior designed for driving, with a sweeping carbon fibre centre display and the trademark Wiesmann seven analogue dials giving the driver all of the information that they need, and nothing more. Luxury touches including the Wiesmann name subtly laser-cut around the dials, soft-close glovebox with a leather belt strap, and tactile smooth, warm, leather surfaces from floor mat to steering wheel make the cabin an extremely pleasant place to be. Finally, dramatic carbon fibre touchpoints further point to a performance car crafted from materials of the very highest quality, and with the most minute attention to detail. 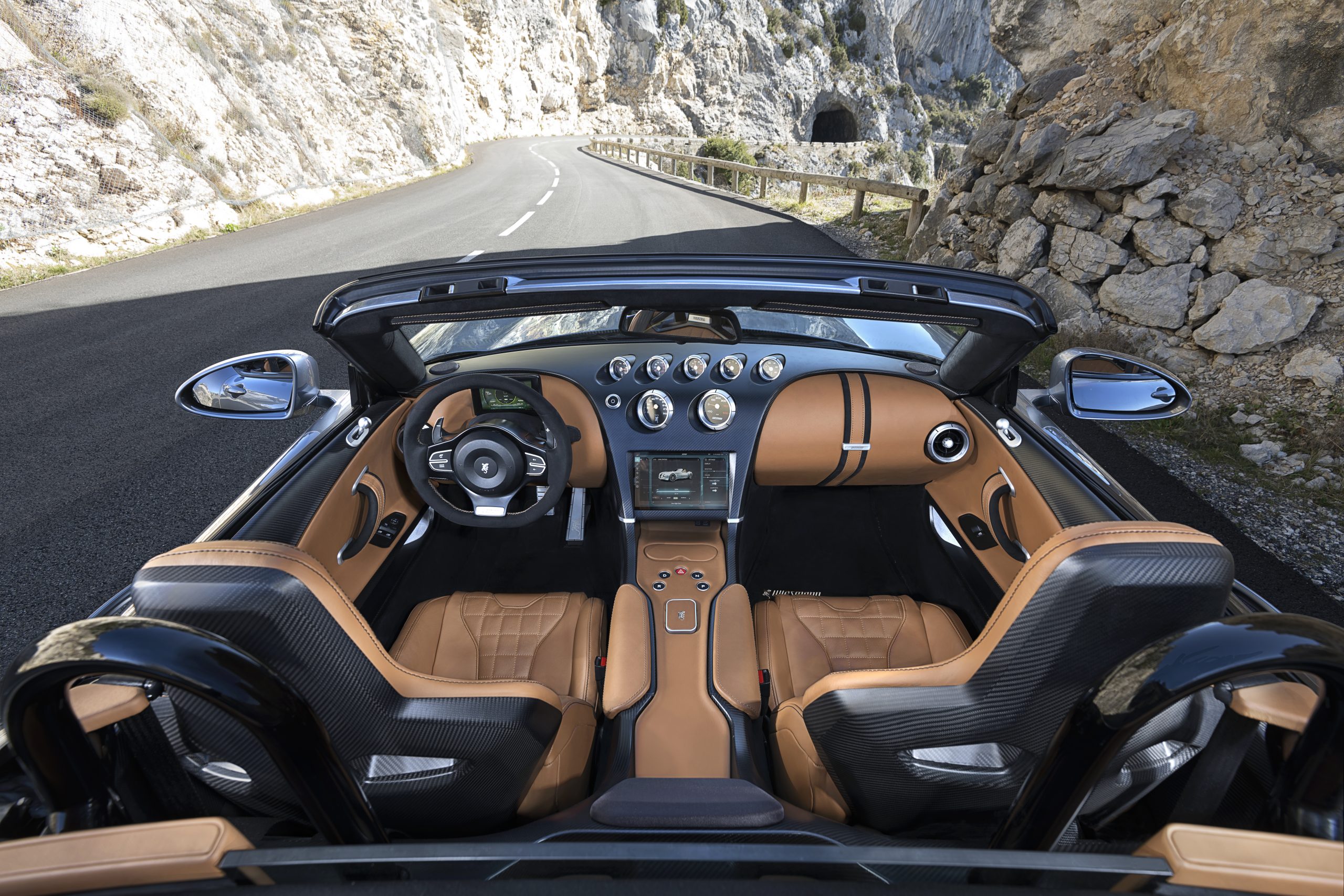 Production of Project Thunderball will take place at Wiesmann’s ‘Gecko’ factory, a stunning state-of the-art facility in Dülmen, Germany. Project Thunderball will be carefully crafted by many of the team which helped grow this iconic German brand, the last truly independent European sports car marque remaining today, alongside some fresh new talent, using the most modern production technology while retaining Wiesmann’s reputation for bespoke German coachbuilding expertise of the highest order.

Founded in Germany in 1988, Wiesmann went on to become a highly successful and globally renowned brand, and one of the last independent German engineered and manufactured automotive marques in the world. Wiesmann manufactures cars for the purist in all of us. Best known for combining German innovation, engineering and design with classic British elegance and style, Wiesmann has not deviated from its founding vision, resulting in hand-built, bespoke vehicles that have been – and will continue to be – recognised by connoisseurs as some of the world’s most iconic and collectable sports cars. 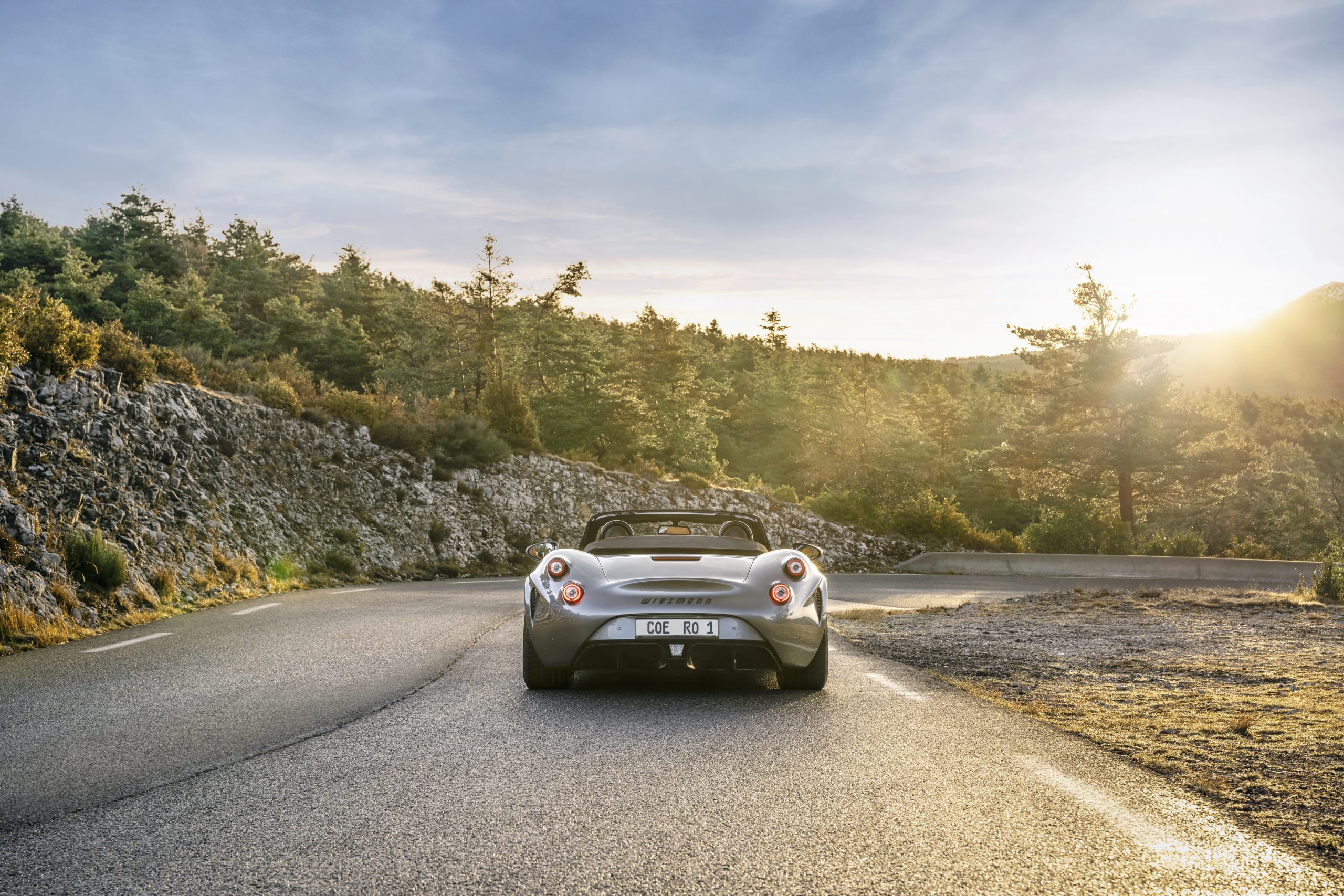 The all-new Project Thunderball will build upon this legacy, with its classic luxurious interior and everything a driver could need in an electric sports car presenting a unique package which will only appreciate in value over time and be passed down from generation to generation.

Project Thunderball is available to order now, with pricing from 300,000 Euros.