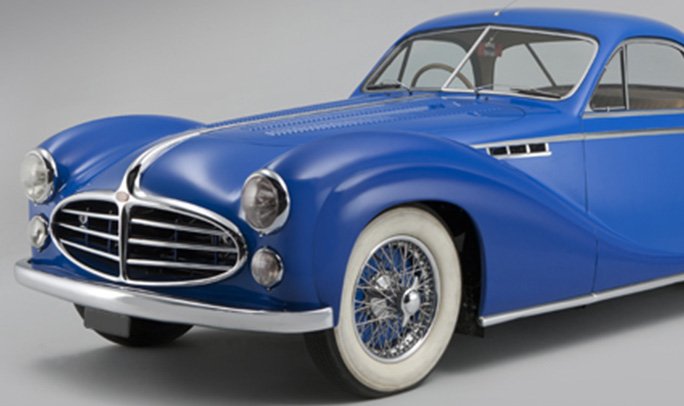 A one-of-a-kind example of Delahaye’s last ever series, the exquisite 235. This car featured as Delahaye’s Paris Auto Salon Show car in 1953 and is truly one of the prettiest cars ever conceived. With its beautifully graduated two-tone paintwork, gleaming chrome and all white wall tyres, the Delahaye is set to astound Salon Privé’s awaiting crowds.

The 235 was Delahaye’s swansong. After the end of WW2, the automotive industry was in turmoil and on the precipice of major change. It seemed that there would no longer be a place in the market for the luxurious fashion statement vehicles that pre-war France greatly loved.

Between 1951 and 1954, 84 chassis of this type were produced. This particular car is only one of two built. Thought by some to have been designed by Saoutchik (mainly due to the almost signature sweeping lines displayed on the 1951 Paris show car),  however it was in fact built by Chapron, and their car of choice to be displayed at the prestigious Paris Auto Salon.

This particular 1953 example was imported by Otto Zippo of precision Motors and was owned by Dr. Herman V. Platt.

In late 1982, after the car was discovered to be in near ruin, it was purchased by Richard Straman who was well known for his spectacular restorations. He restored the car to a condition superior to its origin.

Upon completion, Straman entered the car into the world-renowned Pebble Beach Concours in 1983. He received ‘First in Class’ and was considered for ‘Most Elegant Closed Car’. The following year, he entered the car into the famed Concours for display only. Salon Privé is proud to announce that this is the Delahaye’s first public appearance in over 30 years, and proves that real style never goes out of fashion.