Just 88 examples of the Aston Martin V12 Speedster are available to buyers worldwide and today the brand is unveiling details of a custom specification that is certain to underscore the cars’ instant collector’s item status.

The new car aligns gracefully with a heritage that features not only the exceptional DBR1, but also the breathtaking CC100 which was unveiled in 2013 as a stunning celebration of Aston Martin’s century of sports car excellence – reflecting the sporting heritage and exceptional design capability woven throughout well over 100 years of Aston Martin history.

The DBR1 is, to date, the most successful racing machine constructed by Aston Martin, having triumphed in the 1959 staging of both the 24 hours of Le Mans and the 1,000 km of Nürburgring, also winning the latter in 1957 and 1958. 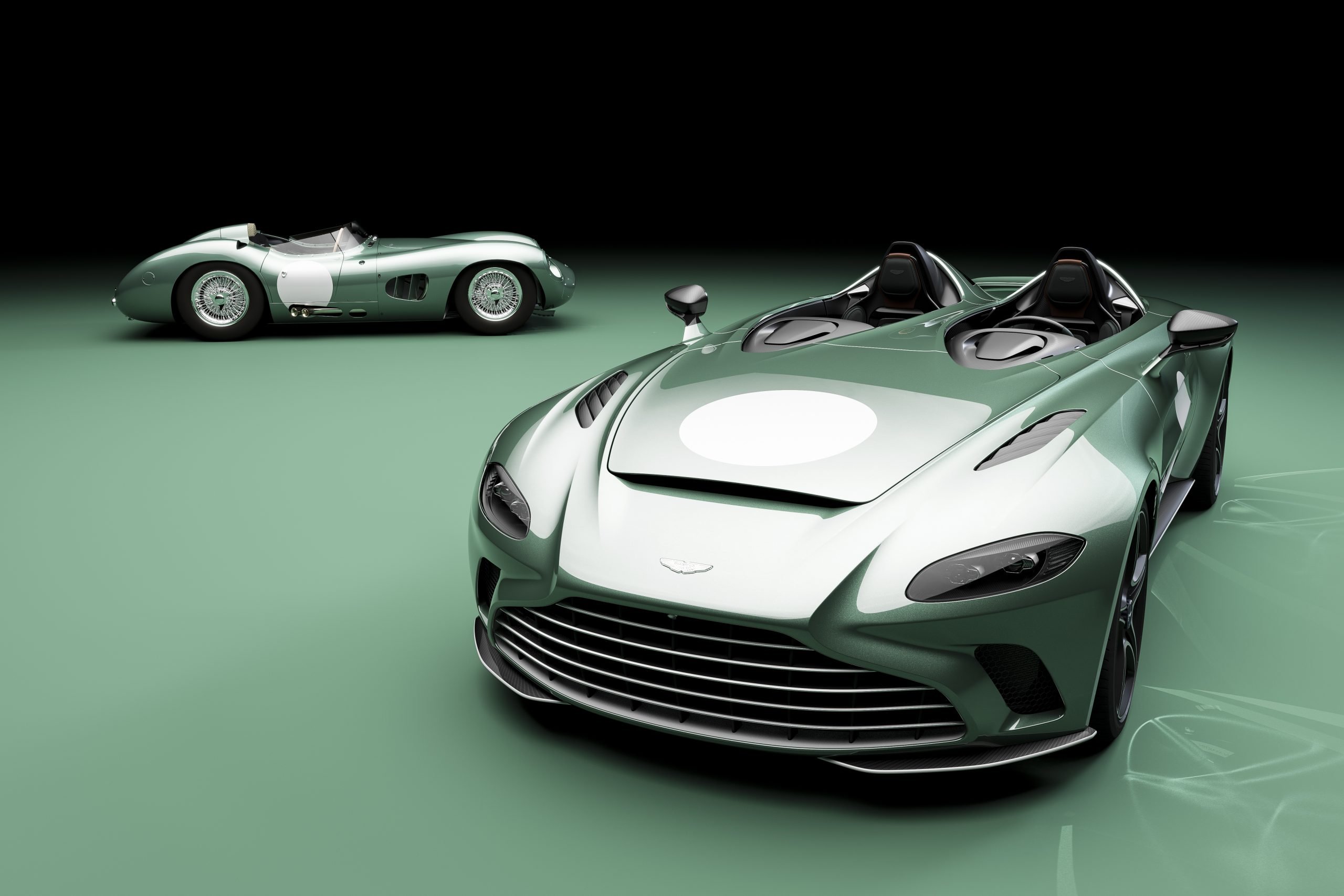 Although a car made for competitive racing, the DBR1 was also a precursor for some of the marque’s most well-known heritage ‘DB’ road cars. It was styled in-house by a highly talented designer, Frank Feeley, and, working alongside Chief Racing Designer Ted Cutting, represents what is unquestionably his ‘finest hour’ – indeed the shape of the DBR1 remains one of the most beautiful and graceful of all time.

At the car’s heart from 1958 onwards lay a 2,992 cc straight six engine mated to a David Brown five-speed gearbox. It was capable of powering this c. 800 kg sports car to an estimated top speed in excess of 150 mph.

Produced as a pure racing model – not directly derived from a road car – just five examples of DBR1 were built: four used to such commanding effect by the Aston Martin Works’ team, and a single car for private use.

With such a rich and important history it’s no surprise, then, that the brand should choose to create a dedicated optional DBR1 specification for it’s new V12 Speedster.

Satin black diamond turned 21-inch centre lock wheels are a feature of this specialist specification, which each Aston Martin V12 Speedster spending more than 50 hours in the painting process alone at the brand’s advanced paint facility.

Outlining the rationale behind this V12 Speedster tribute specification, Aston Martin Chief Creative Officer, Marek Reichman said: “Emotion and exclusivity are at the heart of this car. A rare and exceptional Aston Martin, It has been engineered to offer a visceral driving experience that belies its elegant, artistic shape.

“Creating a bespoke specification that nods to the glory of the DBR1 has been a huge privilege for my team and I, and I very much look forward to seeing these cars being driven with the same enthusiasm that we have applied to their design.”

At the new car’s heart lies a high-performance variant of Aston Martin’s now iconic, 5.2-litre V12 Twin-Turbo engine, capable of generating an output of around 700 PS and 753 Nm. Offering a compelling breadth of performance, superb response and thrilling V12 soundtrack, the engine is mated to a ZF 8-speed automatic transmission mounted towards the rear of the car. 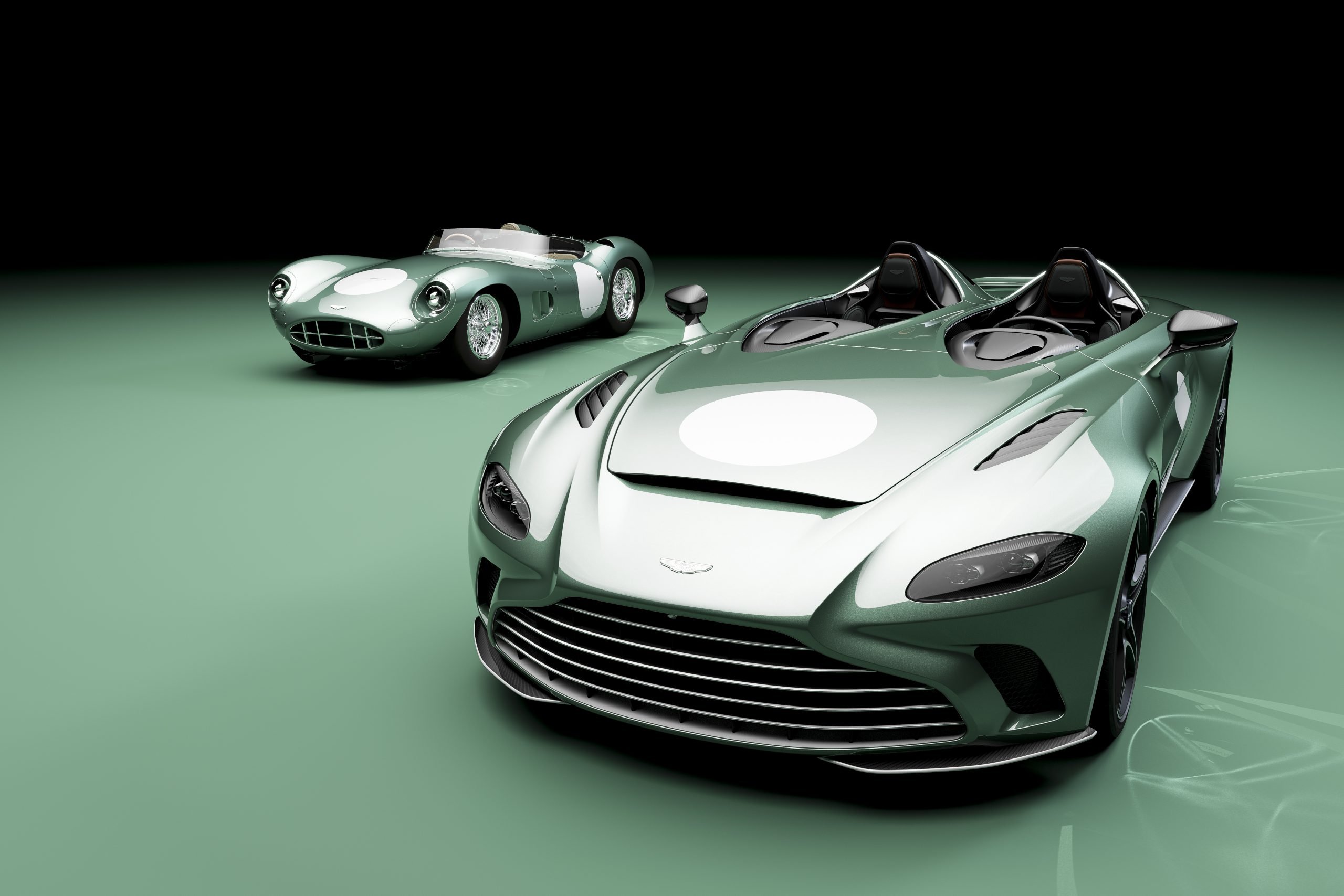 This translates into a 0-62 mph time in the order of 3.4 seconds and a top speed of 198 mph – no mean feat in a car devoid of roof or windscreen.

Orders are now being taken for the DBR1 custom V12 Speedsters, each being hand built at the company’s Gaydon headquarters, with deliveries expected to begin in mid 2021.