Radford has today unveiled the Type 62-2 sportscar at a star-studded event at the Lyon Air Museum in Orange County, California. The Lotus Type 62-2 coachbuilt by Radford (The Type 62-2), the first modern coachbuilt Radford, is limited to just 62 examples worldwide, with each model built precisely to its individual owner’s desired specification – the marque is currently accepting applications for build slots for the ultra-rare coachbuilt car.

Radford was borne out of inspiration by the legendary British coachbuilding company of the same name, which once built cars for a celebrity clientele that included all four of The Beatles. The global company with British heart and soul is co-owned by leading designer Mark Stubbs, broadcaster and motoring specialist Ant Anstead, former FIA Formula OneTM World Champion, Jenson Button and acclaimed business adviser and lawyer Roger Behle.

Radford’s first new model of the modern era is built in a partnership with Lotus. While the mid-engine two-seater coupé takes inspiration from the revered 1960’s Lotus Type 62, it utilises the Hethel marque’s latest technologies to deliver the purest possible driving experience. The Radford Type 62-2 is engineered for an unadulterated mechanical feel, exceptional engagement and uncompromising poise.

The global premiere is the first time the elegant lines of the exterior have been shown, and the highly luxurious interior will be revealed at a future date. The car’s design has been led by preeminent automotive designer Mark Stubbs who has taken the project from a sketch to the production-ready car revealed today. Stubbs’ design for the Type 62-2 evokes the spirit of Lotus and the original Type 62 as a homage to the marque’s illustrious motorsport history. With support from Radford’s engineers, former FIA Formula OneTM World Champion Jenson Button has fine-honed the dynamic response of the Type 62-2 to ensure a superlative driving experience.

The Type 62-2 offers design simplicity combined with a classic flair. The exterior provides the theatre and drama becoming of a luxurious, low-volume coachbuilt car – and the lines which evoke the original 1960s Lotus race car ensure exceptional elegance.

The most striking characteristics of the Type 62-2 exterior design are arguably its ground-hugging stance, low height at just 1,133mm, voluptuous wheel arches, striking side air intakes, distinctive double rear ducktails and doors which cut into the roofline and form part of the roof structure. The sensuous, uncluttered nature of the body surfaces are enabled by the car’s flat underbody and diffuser. These provide exceptional downforce, negating the need for a plethora of ungainly aerodynamic appendages, resulting in deliberately simple, smooth-flowing, achingly beautiful lines and a timeless, coachbuilt appearance. 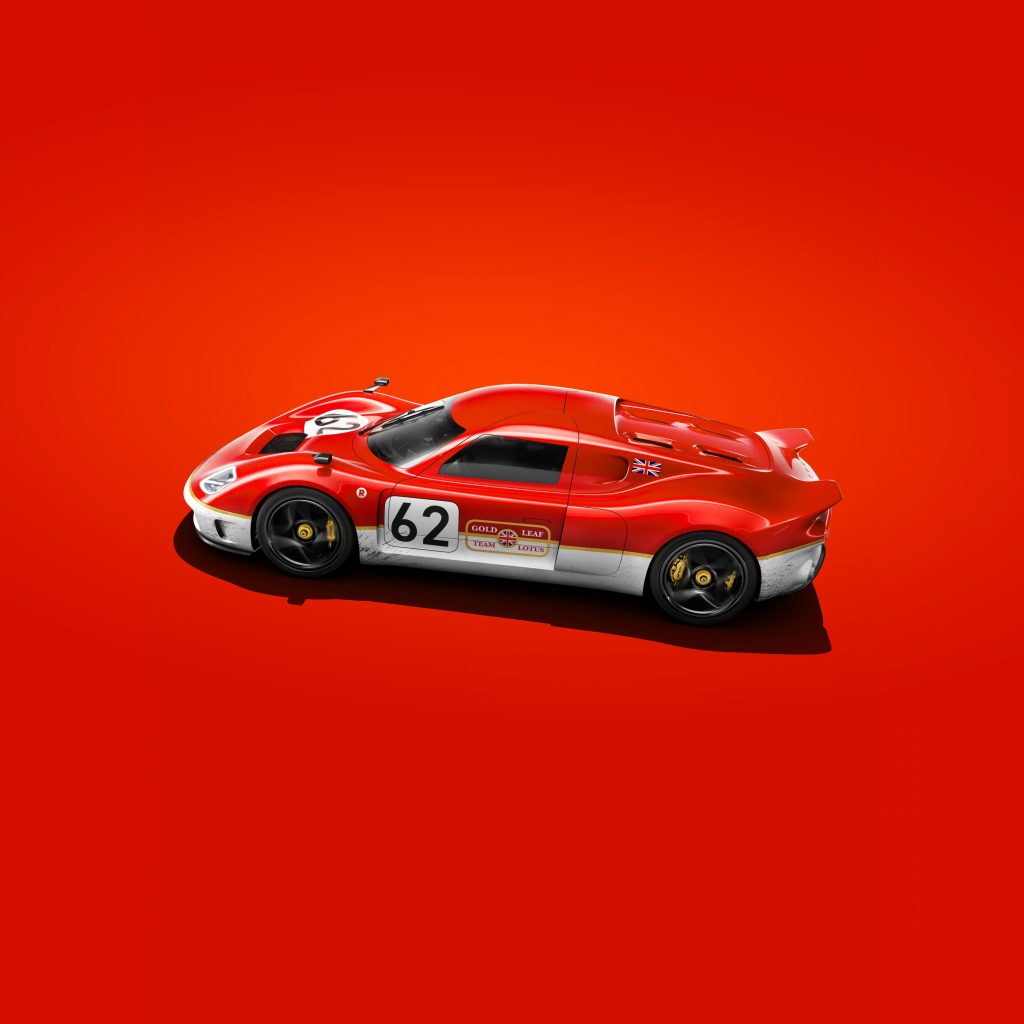 The car’s side profile remains unerringly faithful to the original, displaying the signature curvaceous high wheel arches and low roofline. Slimline side windows add to the visual drama, as do the cooling ducts, which channel air rearwards to the mid-mounted engine.

At launch, Radford will introduce two versions of the Type 62-2. A ‘Classic’ version, with subtle design cues to the original Type 62 Lotus car which was designed without a wing, and a ‘Gold Leaf’ version, which pays homage to the race car’s iconic livery and distinctive wings added by Lotus in period for more downforce after track testing. Both cars beautifully encapsulate the quality and attention to detail that the Radford brand embodies. On the Classic Type 62-2, five-stud 17-inch forged aluminium wheels are fitted at the front and 18-inch wheels at the rear. On the Gold Leaf model, the wheels are two-piece aluminium 18-inch wheels at the front and 19-inch at the rear, with optional period centre-lock fixings available to further enhance the car’s historic racing style.

At the front, the clamshell sits low to the ground with a central air intake and two side apertures to ensure optimum cooling and airflow. The front wheel arches dominate the forward aspect, reaching high above the lower line of the windscreen and providing a driver’s eye view akin to that found in a 1970s Le Mans race car. A bonded flush cadet-style wrap-around windscreen and a single central wiper blade complete the period endurance-racer look.

Emanating from the tops of the two curvaceous arches are the slimline aerodynamic carbon composite wing mirrors with embedded camera technology. Angular LED headlights sit flush into the bodywork, and Daytime Running Lights within the lighting units create a distinctive light signature.

Along the side of the car, subtle side vents highlight the ‘form follows function’ nature of the Type 62-2, channelling air in towards the radiators while providing yet more excitement to the design. From this view, the doors are clearly visible, the tops of which extend into the car’s roof. This feature provides easier ingress and egress and gives a subtle nod to Radford’s involvement with the prototype Ford GT40 Le Mans car back in the 1960s, as the company helped fashion that car’s doors, rear engine hatch and front nosepiece.

At the rear of the Gold Leaf Type 62-2, the double ducktail spoiler is immediately visible, with the iconic Lotus lettering visible between the double ducktail spoilers. On the Classic Type 62-2 model, the ducktails are omitted in favour of a more subtle curvature to the rear end, this is also an homage to the original car which was designed without wings. On the original Lotus Type 62, the wings were added later after initial track testing, to provide the car with additional downforce.

Below sit distinctive rear light units, which hark back to the small square light clusters of the original Type 62. A smooth line connects the two rear light units, providing a more modern light signature and visually widening the car’s rear. The light cluster uses LEDs, which blink to indicate when the vehicle is turning left or right.

The rear is finished by two symmetrical wide-bore ceramic coated exhaust pipe tips. Underneath the exhausts, the bodywork kinks upwards above a deep diffuser which starts as a flat floor right from the front of the car, emanating at the rear, providing downforce and enhancing rear cornering grip.

Above the ducktail rear spoilers on top of the engine bay sits a beautifully crafted carbon fibre panel. Four ‘pill-shaped’ cut-outs – reminiscent of the Lotus Europa – provide another subtle nod to the car’s heritage while also serving a cooling function.

Jenson Button: “Creating a car that is simultaneously luxurious and comfortable, and great to drive, is a tough challenge, but the first Radford of the modern era delivers. Type 62-2 is a driver’s car at its heart – when you see the design, it looks just like a 70s Le Mans car. And when you sit behind the steering wheel and look through the curved windscreen, you can see the front wheel arches – something you just don’t experience on road cars today. With such a low centre of gravity, the car’s body doesn’t roll. The chassis exhibits all the hallmarks of a beautifully set up race car for the road – gifting the driver supreme confidence to extract maximum enjoyment every journey.” 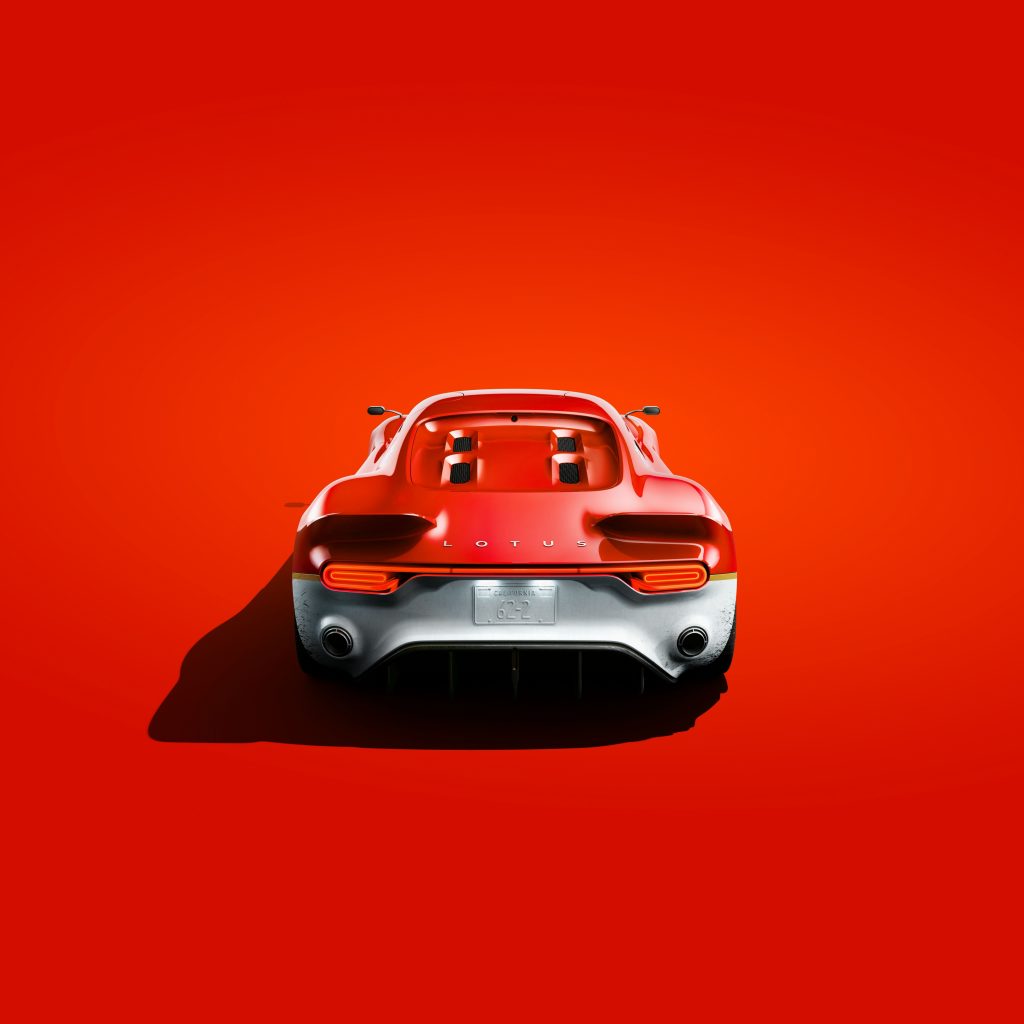