Blenheim Palace 5th September: Salon Privé, firmly established as one of the longest-running and most successful motoring events in the UK, opened its doors today – Thursday 5th September – for the first of four days of automotive celebration.

Salon Privé visitors could admire many of the finest and fastest, modern supercars and hypercars, with a record 11 cars being shown in public for the very first time on British soil  – just as they will be able to over the coming days of the event – with five making their UK debut, five their European debut, and one its global debut; a first for Salon Privé.

Salon Privé’s very first world debut was the Bentley Corniche, the stunning recreation of the 1939 experimental pre-war prototype that was destroyed during the War, with this brand new car created by Bentley Motors and its Mulliner bespoke coachbuilt division. The ‘new’ Corniche was presented at Salon Privé along with Bentley’s EXP 100 GT, making its European debut within the grounds of Blenheim Palace just weeks after its American unveiling at Pebble Beach. 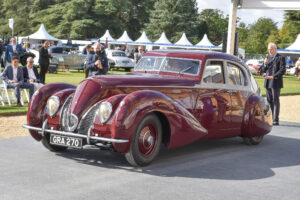 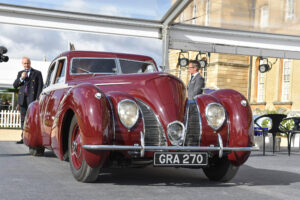 Other exciting and significant Salon Privé new model debuts included the European premiers of the new Rolls-Royce Ghost Zenith Collection, hot on the heels of its Pebble Beach announcement, with one of 50 examples being built taken to the Salon Privé presentation stage, plus the first  European sight of the revised Automobili Pininfarina Battista, and the British debuts of the more potent Alpine A110 S derivative, the carbon fibre-bodied Ateliers Diva Targa and the Jannarelly Design-1, plus the hybrid Austro Daimler ADR 630 Shooting Grand, the Puritalia Berlinetta, and the Tushek TS 900H APEX.

All of the other supercars and hypercars already highlighted will be present at Blenheim Palace throughout the remaining three days of the event.

Visitors to the first day of the 14th edition of Salon Privé were also able to savour an exceptional world-class collection of automotive glamour and royalty adorning the stunning lawns of Blenheim Palace, home to His Grace, the 12th Duke of Marlborough and his family. After just one day, the 2019 Salon Privé is already proving once again to be an automotive garden party like no other; a must-attend event where the best of the best reside for three days of high-brow shoulder rubbing and car-talk.

First day Salon Privé guests were able to soak-up the event’s unique, relaxed atmosphere and stunning Palace backdrop, whilst admiring many of the finest motor cars and bikes in the world. More than 50 exceptionally rare cars along with 20 motorcycles were judged during the day in the Salon Privé Concours d’Elégance by Chubb Insurance by an expert panel of international ICJAG judges with the Concours committee, chaired by five-time Le Mans winner Derek Bell MBE.

Commenting on the successful first day of the 2019 Salon Privé, event founders David and Andrew Bagley commented, “This has been a fantastic first day and we are delighted and very proud to have our first ever world debut today with the Bentley Corniche. With ten other significant debuts from seven different countries, the international support this year from some of the world’s leading prestige cars has been fantastic. The patronage and support of the event through known car collectors, prestige vehicle manufacturers and the enthusiastic and knowledgeable visitors is truly appreciated.”