The last of four Bentley 3-Litre experimental cars to be produced in the vintage period, which not only performed a vital role in proving the company’s future technology, but later enjoyed a successful racing career, will be making its maiden show appearance at the Salon Privé Concours d’Elégance presented by Aviva at Blenheim Palace from 31st August to 2nd  September.

Recently restored by marque expert William Medcalf after 50 years in the Schellenberg Collection, EXP4’s current owner, Jonathan Turner, has now returned the car to the race track after a 70-year hiatus. Since then, it’s had significant showings at Goodwood Revival and the Benjafield’s 100 race at Silverstone – a perfect tribute to its pre-war competition history with Margaret Allan, the first woman to win a scratch race at Brooklands.

But long before chassis number EXP4 was pounding the banking at Brooklands, it became an important player in Bentley Motors’ transition to four-wheel braking in the early 1920s. Originally built as a 3 Litre model with a touring body in 1922, EXP4 was employed by Bentley’s chief designer, Frank Burgess, to prove the safety benefits of fitting brakes to the front, as well as the rear axle. Burgess faced plenty of mistrust from the press and public – and even W.O. Bentley himself – about the potential danger, and discomfort to passengers, of such a system. However, to show how much quicker a car would stop with all four wheels braked, he developed a device for EXP4 that used a whitewash-soaked paintbrush mounted beneath the chassis, marking the road when the brakes were applied, and once again when the car drew to a halt. Needless to say, EXP4’s braking performance bettered that of a standard rear-braked-only 3 Litre, and the system went on to be adopted by the company.

Burgess obviously had an affinity for EXP4 and continued to use it as his personal car thereafter. But it’s development role hadn’t yet finished, and when Bentley started experimental trials for the new 4 ½-litre engine, EXP4 was once again used as a ‘mule’ for the larger powertrain – the first short-chassis Bentley to do so – hence why today the car has the unusual union of a 3 Litre chassis, and a 4 ½ Litre’s bulkhead and radiator.

Nearing the end of its development life, EXP4 was re-bodied as a saloon, but in 1929, Burgess, who had taken ownership of the car and used it as family transport, died prematurely. Two years later, the car was once again re-bodied, this time with a tourer body by Park Ward. And it was in this form that Margaret Allan, whose father owned the Allan Line Steamship Company, purchased EXP4 in 1933.

Allan was already an accomplished racing driver and had received Brooklands’ prized 120mph badge after recording 122.37mph on the banking in a Bentley 6 ½ Litre, as well as her aforementioned success in scratch racing at the circuit. Allan immediately pressed EXP4 into service at Brooklands, winning the Junior Long Handicap outright on July 8th, 1933, with The Motor’s journalist reporting that, ‘Miss M Allan…handled her big Bentley superbly.’ Further success was to come, with Allan frequently reaching 92mph on the gnarled and bumpy banking of the Surrey track. She was often placed in the top four in races, and traversed the nation competing in EXP4, at events as far apart as the Glasgow Scottish Rally and Brighton Beer Trial. The car was also Allan’s daily driver, and the cushion she used to attain a comfortable driving position still remains with EXP4 today.

Allan’s last event, after nearly two decades of ownership, was the 1950 Circuit of Ireland Rally, where she won the Ladies’ Cup. EXP4 was then sold in the early ‘50s to Keith Schellenberg who preserved the car in the Schellenberg Collection, with minimal use, until Jonathan Turner purchased it in February, 2015.

Today, EXP4 has been restored to how it was when Margaret Allan was campaigning it from the ‘30s to the ‘50s. William Medcalf spent a year carrying out the work and was careful to maintain the car’s originality at all costs. “The body is the one it raced with,” said Medcalf. “(It’s) a 3 Litre body with a 4½ Litre bulkhead, so the scuttle is different.”

Medcalf’s challenge was to decipher what appeared to be ‘wrong’ about the car. Because so many changes had been made by the factory during its life as a development ‘hack’, Medcalf’s team was at pains not to strip out parts that were non-standard, knowing that the chances were they formed part of its unique history. Medcalf again: “Some (parts) we can explain, some we can’t. The wing irons, for example, are all in different places….Then there’s the handbrake. It’s unique, forged and with a big boss… (and) every vintage Bentley bonnet has 12 louvres on each side. This has 13.” 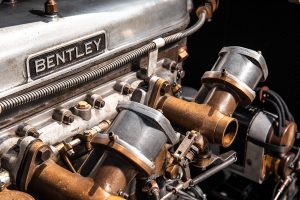 Beautifully patinated, thanks to Medcalf’s sympathetic approach to bringing EXP4 back to life, the car is set to be a star attraction at the Salon Privé Concours d’Elégance presented by Aviva next month. Salon Privé’s chairman Andrew Bagley is looking forward to seeing the EXP4 on Blenheim’s South Lawn: “This car represents an important part of Bentley’s engineering history, and was the lynchpin for two significant technical advances: standardising four-wheel brakes, and the introduction of the 4½ litre engine. That it’s been so painstakingly returned to the race car that it went onto be in later life makes it a compelling entrant at Blenheim next month.”