With their roots in competition, a brace of Italian thoroughbreds is set to capture the spirit of wealthy, amateur racing drivers and owners from the pre- and post-war eras at Salon Privé Concours d’Elégance presented by Aviva. Both cars are linked to the famous Mille Miglia road race, which in its original form ran between 1927 and 1957, and each model epitomises the importance its manufacturer attached to competition improving the breed.

Just one of the highlights of next month’s Salon Privé Pre-war Open Class will be a rare example of Alfa Romeo’s 6C 2300 B in more powerful Mille Miglia specification. Alfa Romeo only made 107 Mille Miglia derivatives, and chassis 815045 is now unique, being the sole-survivor of four 6C 2300 B convertibles made by Swiss coachbuilder, Graber, as well as being the only one to wear the ‘MM’ designation against its engine number. 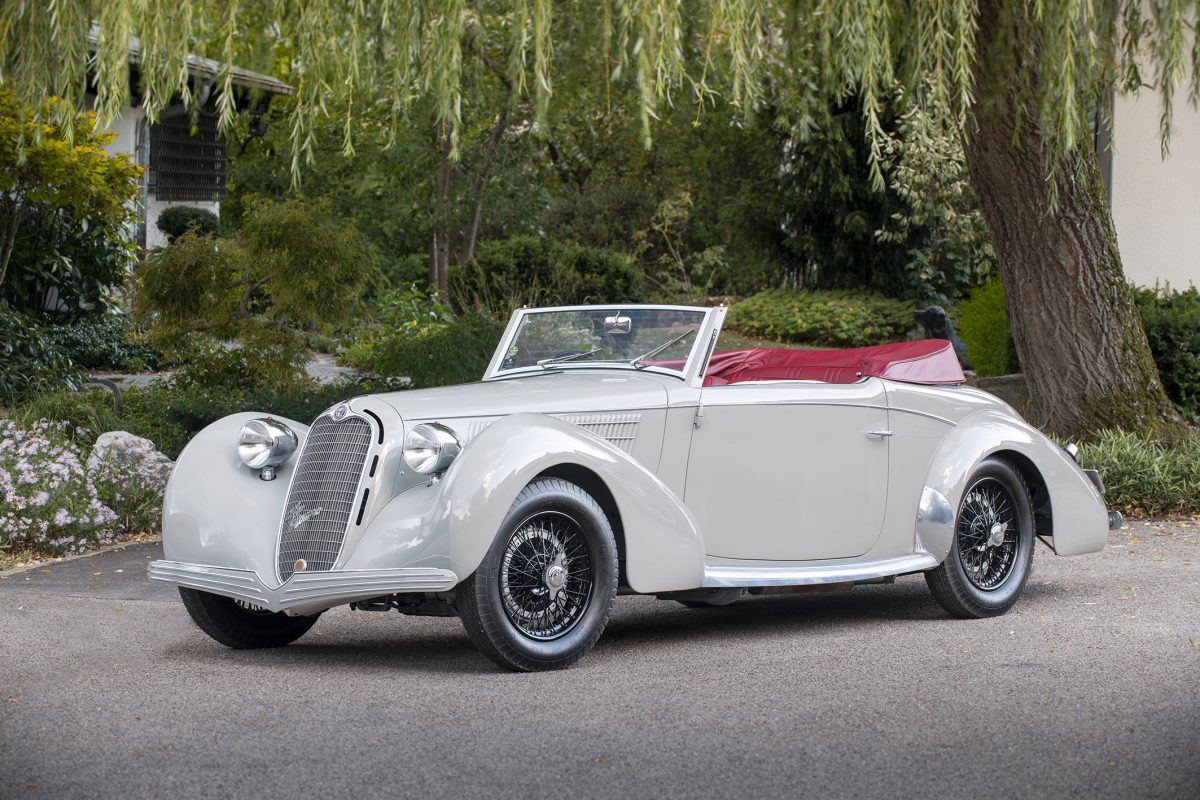 Produced between 1935-’38, the Vittorio Jano-designed 6C 2300 B employed a completely new chassis, incorporating independent suspension all round (among the first European cars to do so), and using what was effectively the front suspension from Alfa’s grand prix cars, with trailing arms and coil springs. Its advanced engine was a revelation, too: a six-cylinder cast iron block topped with an aluminium cylinder head and overhead valves and double-overhead camshafts.

But not all 6C 2300 Bs were the same. Alfa Romeo had enjoyed immense success in the Mille Miglia road race between 1935-’38, with numerous class wins and a bumper year in ’37, when it clinched first in class and fourth overall. Naturally, the company was keen for this success to spill over to its road cars, and thus introduced the 6C 2300 B Mille Miglia. With twin Solex 35-40 FH carburettors, versus the standard Gran Turismo model’s single item, power was boosted from 76bhp to 95bhp, with a commensurate lift in maximum speed to 90mph. All Mille Miglias were also based around the 6C’s 115-inch wheelbase short chassis for optimum agility.

Salon Privé’s matching-numbers Graber-bodied car was built in 1938, and according to its factory order, had taken the carrozzeria’s artisan workers a total of 1,888 man-hours to complete. First owner, Mr. Martin Müller, was invoiced for CHF 5,500 – a not inconsiderable sum at the time.

More recently, the 6C resided at the Righini Collection near Modena, Italy, from where it was purchased in 2013. The car then underwent a painstaking three-year-long restoration, coordinated by renowned Alfa Romeo specialist Jürgen Graumann, with the emphasis on retaining as much of the car’s originality as possible.

Andrew Bagley, Salon Privé’s chairman, welcomed the 6C in the Pre-war Open Class: “Even when new, this car was unique, but the fact that it’s become the only Graber-bodied 6C convertible to survive, too, makes it a real treat for our Salon Privé guests.”

In modern parlance, Fiat’s 8V model would have been the company’s ‘halo car’ when it was launched in 1952. But the first owner of Salon Privé’s 8V – set to be a star attraction in the Blenheim venue’s Post-war Closed Class – was intent on creating a car like no other, taking initial inspiration from an Aston Martin ordered by royalty, before changing the design brief to meet his racing aspirations. 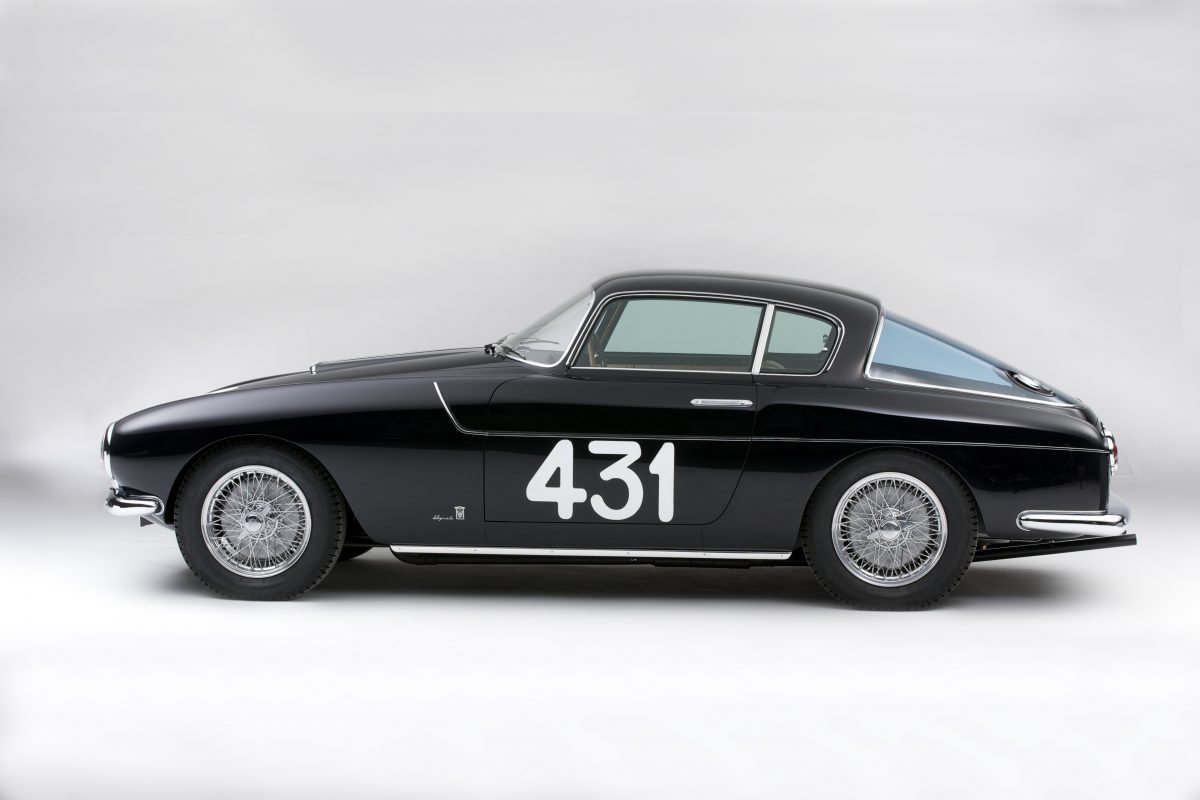 The 8V model had almost come about by accident. Fiat’s legendary engineer, Dante Giacosa, father of game-changing mainstream models like the Fiat 500 and 128, had been tasked with developing a new V8 engine in the early ‘50s for a mid-range saloon. But when the programme was scrapped, he suggested that the engine be re-purposed for a high-end, but less costly performance car than those being produced by Alfa Romeo and Ferrari.

What resulted was to cause a furore when it was unveiled at the Geneva Salon in ’52. Road & Track magazine declared it the ‘biggest surprise of the year’, and it was not difficult to understand why. The 8V’s V8 engine was a Giacosa masterpiece, with the upper portions of a pair of 70-degree V4 engines mounted on a single crankcase to make a 1996cc overhead-valve V8. Initially producing 105bhp at 6000rpm, the 8V (Fiat believed Ford to have copyright on ‘V8’) could top 118mph, and it soon became clear that it was as adept on the track as it was on the road.

Which explains why gentleman driver and first owner of Salon Privé’s 8V, Mario Bonacina, ended up on the start line of the 1955 Mille Miglia at 4.31am (hence the race number) on April 30 that year. Of the 114 8Vs built, only 34 were bodied by Fiat, with the remainder produced by various carrozzeria to owners’ bespoke specifications. Bonacina had entrusted Vignale with his 8V chassis – one of only ten owners to do so – and had originally tasked designer Giovanni Michelotti with emulating the look of a one-off Aston Martin DB 2/4 commissioned by King Baudouin of Belgium. However, early in 1955, Bonacina changed the brief from ‘coupé speciale gran lusso’ to ‘tipo Mille Miglia 55’, after deciding to enter the famous road race. Revisions were made to the bonnet and rear section of the car, and two fuel-filler caps were let into the Plexiglass rear screen.

Vignale completed the 8V, chassis 0066, just three weeks before the race, presenting it to Bonacina in a dark-blue livery, with natural tan leather upholstery, chrome Fergat wire wheels, and fitted with an optional, all-synchromesh five-speed gearbox. Like all other 8Vs, due to its narrow cabin, the passenger’s seat was set back by one foot to allow the driver more elbow room.

It was to be Bonacina’s fourth attempt at the Mille Miglia, entering this time in the ‘Granturismo oltre 1300’ class with 62 other cars, including 11 8Vs. Alas, while five 8Vs appeared in the top 50 finishers, Bonacina’s car was recorded as a ‘DNF’, although it appears to have made excellent progress in the race’s early stages.

After being sold in June 1956 and passing through two more Italian owners, 8V 0066 started a new life in California with its fourth owner Shelley Pfeiffer. Pfeiffer ended up replacing the 8V’s V8 engine with a humble 4-cylinder Chevrolet unit after it failed, and was unable to source replacement parts. Incredibly, after the 8V was sold again in 1981, new owner Daniel Simpson managed to track down its now repaired original engine (number 0136) in Dallas, and although it took a further 13 years of negotiation to buy it back, the unit was eventually repatriated with chassis 0066. The car has since undergone a complete nut and bolt restoration.

“Any 8V would create a stir at Salon Privé, but this one is quite special,” said Andrew Bagley, Salon Privé’s chairman. “To think that this car shared the same start-line in the 1955 Mille Miglia as Moss and ‘Jenks’ in their winning Mercedes 300 SLR is remarkable. Now back in original form, it is sure to be a crowd-pleaser at Blenheim next month.”