After more than six decades spent overseas, a rare example of one of Britain’s fastest and most exclusive pre-war cars has returned to the UK, and will make its first public appearance at Salon Privé’s Concours d’Elégance presented by Aviva next month (31 August – 2 September).

The 1939 Lagonda V12 Rapide Drophead was one of just 17 W.O Bentley-designed cars fitted with the uprated ‘Sanction IV’ engine, derived from Lagonda’s V12 team cars that finished third and fourth at La Sarthe in 1939. Chassis 14107 was also one of only two such cars to wear James Young coachwork, having originally been ordered as a rolling chassis from the Lagonda factory by first owner, Major Godfrey Anthony Gillson.

Major Gillson would have undoubtedly seen the Lagonda as a less obvious, but equally prestigious alternative to either a Rolls-Royce or a Bentley, especially given that the latter company’s founder had overseen the V12 model’s engineering and design. W.O Bentley had been hired as technical director by Lagonda’s new owner, Alan Good, after Good saved the company from near bankruptcy in 1935, fighting off a bidding challenge from Rolls-Royce. Good aimed to send Lagonda upmarket, and knew that W.O – his talents squandered by Rolls-Royce since it purchased Bentley Motors – would be instrumental in realising that ambition. In short, Good and W.O wanted to produce the best car in the world. 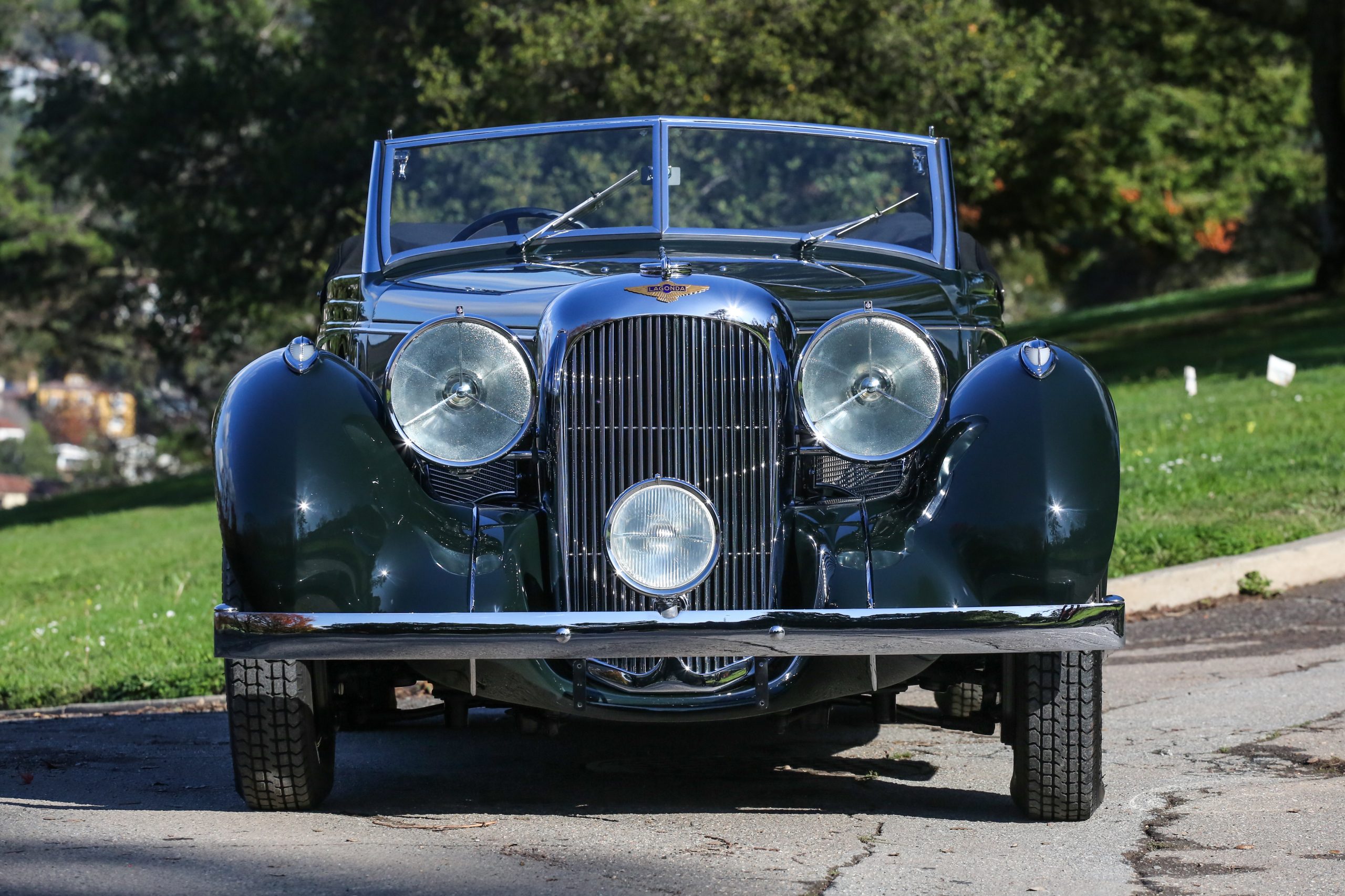 W.O was tasked with designing an all-new 60-degree V12 engine that would power one of the fastest cars on the British market in the 1930s. Bentley’s solution was to effectively modernise the mighty 8-litre unit that had been the swansong of his old company, albeit with twice the cylinders. The Lagonda V12 that emerged was an advanced, but simple, masterpiece. Unlike Rolls-Royce’s 7.3-litre Phantom III – Britain’s only other production V12 in the ‘30s  – it produced more power (180bhp in basic form), yet from a smaller and more efficient, 4480cc unit. Using a combined cylinder block and upper crankcase cast from iron, and an aluminium lower crankcase, each cylinder bank had chain-driven single overhead-cam valve gear – highly advanced for the time. Such was its size, that two oil pumps were needed to lubricate the V12, one for the valve gear, and one for the main and big-end bearings. W.O’s objective, as always, was not only to build an engine with incontestable performance, but one that was exceptionally refined and effortless; he also insisted that it should accelerate from standstill to over 100mph in top gear.

Lagonda initially showcased the V12 engine in an existing LG45 chassis at Olympia in 1936, but it wasn’t until 1938 that the first official model was sold. By then, W.O had developed a new chassis to house the mighty powertrain, with independent suspension at the front using torsion bars and hydraulic dampers, and a live axle with semi-elliptical leaf springs at the rear. Braking was by four massive 16-inch drums, hydraulically operated and developed by Lockheed, and the chassis came in three wheelbases: 124-inch (3150mm), 132-inch (3353mm) and 138-inch (3505mm). All came as standard with a built-in hydraulic jacking system.

Alas, the Lagonda V12’s true potential was never realised, thanks to the outbreak of war in 1939, and in the end only 189 engines were produced. But prior to that, this fast, expensive (£1,200 was needed for the shortest wheelbase rolling chassis) and exclusive model gained much prominence. In 1939, Lagonda entered two modified V12 Rapide models in that year’s Le Mans race. Modified to ‘Sanction IV’ tune, with among other improvements, four, instead of two downdraught carburettors liberating 220bhp, they unexpectedly finished third and fourth overall. Racing driver and parliamentarian Earl Howe then added to the success by recording an RAC-timed average speed of 101.5mph in one hour at Brooklands, including a stop for a wheel change after a puncture. At one point, his V12 hit 108.27mph. 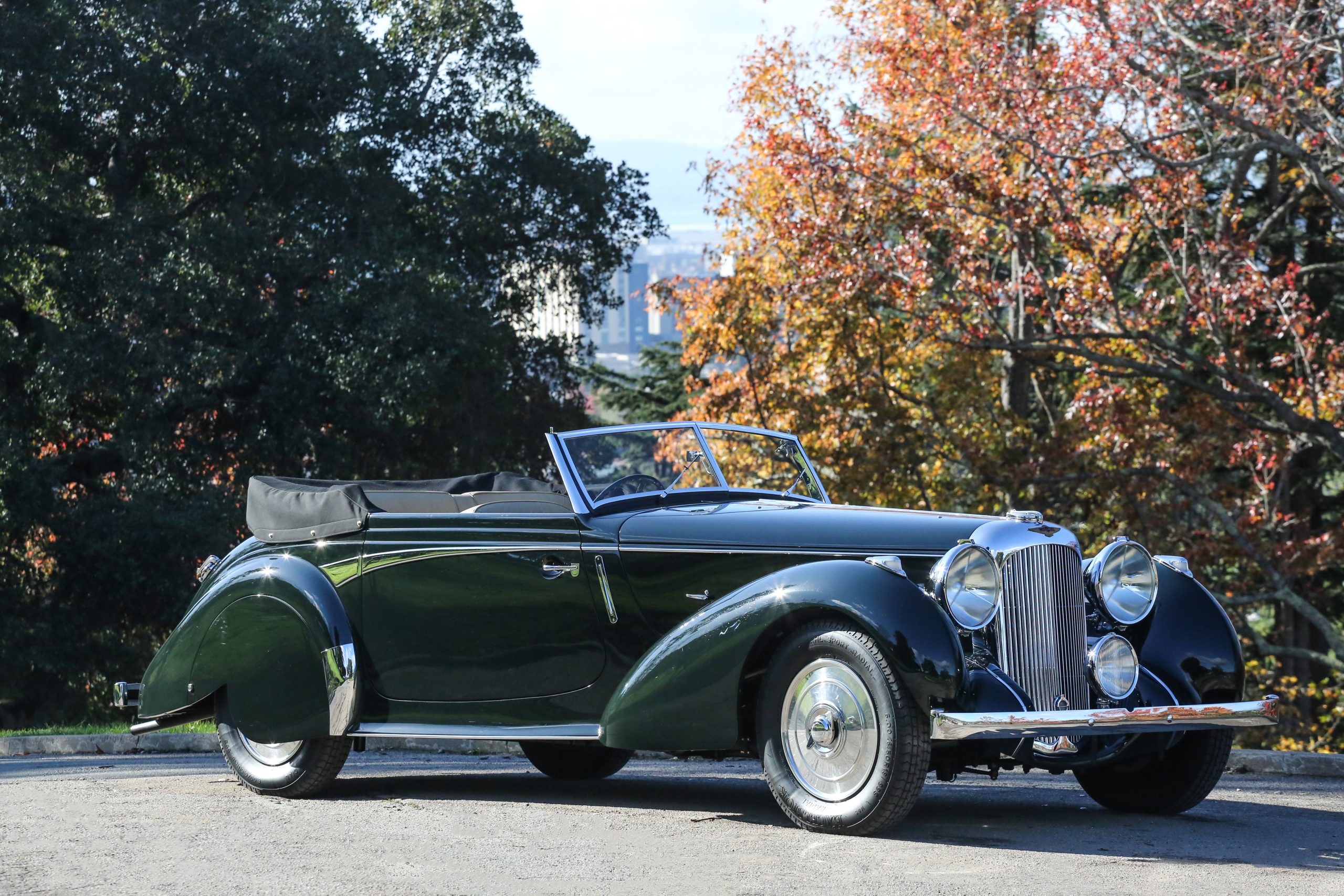 After Major Gillson’s death in 1944, Salon Privé’s short-chassis V12 Rapide was purchased by Lagonda’s former factory manager, Jim Davies. Davies kept the car for 13 years, eventually handing ownership to Australian Lagonda enthusiast, Jim Whitehead, who through his life owned seven V12s. And it was with the Whitehead family that the car remained for the next 58 years, before being sold to another Australian, Ian Tribe. Tribe commissioned Auto Restorations in Christchurch, New Zealand to restore the car sympathetically, with a great emphasis on retaining its originality. Testament to their work was a first-in-class at Pebble Beach in 2018, before being sold once again in 2020 to its current UK-based owner, Adrian Burr.

In a nod to the Lagonda’s early years, the accompanying images were taken at Major Gillson’s ancestral home, Cornwell Manor in Oxfordshire. Immaculately presented in Velvet Green, with an interior trimmed in tan leather, chassis 14107 is a splendid example of a matching numbers V12 Rapide. Still with its ‘Sanction IV’ quadruple downdraught SU carburettors, the car’s life will extend beyond the concours circuit, too. Owner Burr – who also has the only other James Young-bodied V12 Rapide to keep it company – believes in using classic cars, no matter their rarity or value.

Salon Privé’s chairman Andrew Bagley is delighted that the Lagonda will be gracing Blenheim’s South Lawn next month: “The Lagonda V12 Rapide is perhaps one of only two cars from the 1930s that could exceed 100mph, a remarkable feat given its weight and aerodynamics. That Salon Privé will be hosting such a unique and original version of that model is an honour, but we know that we will do the car proud.”

Tickets for Blenheim Palace are on sale now via the website: www.salonpriveconcours.com/buy-tickets/